A statue with a missing head and arms is tricky to identify. This figure with its relaxed pose and generous folding drapery, however, is similar to statues of Asclepius, the popular ancient Greek hero and god of medicine. Asclepius is usually shown with a beard and holding a staff wrapped with a twisting snake. Otherwise, the figure could be a member of the ecclesia, or citizens’ assembly, such as a philosopher, or a similarly respectable male citizen.

The costume worn by this figure is known as a himation (pronounced “hee-mat-ee-on”), a rectangular piece of cloth thrown over the left shoulder and wrapped around the body. It was worn in ancient Greece from about 750 to 30 BC. 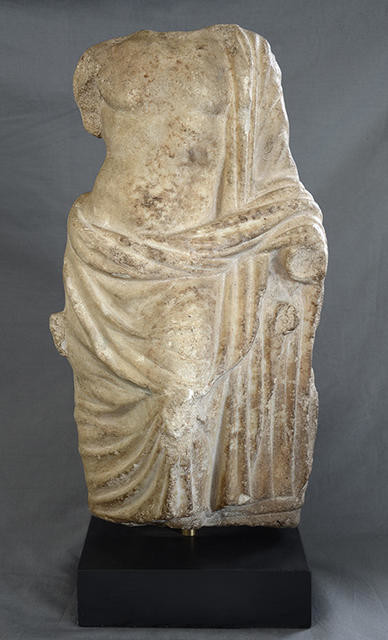