Richard Earlom was one of the most celebrated reproduction engravers of his day and one of the first to use etched lines for strengthening drawing and varying mezzotint tone. For many years Earlom worked as an engraver for publisher engraver John Boydell (1719 - 1804). It was while working for Boydell that he made this plate after a painting with the same title by French artist Sebastian Bourdon (1616 - 1671). The subject of the work is taken from Genesis 31 : 34, the story concerning the theft, hiding and disposal of Laban's images by Rachel and Jacob. When Jacob had completed his 14 years of service with his uncle Laban he left to return to his paternal home at Canaan. He took with him his wife Rachel, Laban's daughter, Leah, and their maidservants and all the sheep, goats and animals from Laban's stock that had been promised to him. But, before leaving, Rachel had also stolen her father's household gods (images). On discovering this, Laban pursued them. Jacob, unaware of the theft, invited Laban to search all his belongings. Rachel deceived her father by concealing the images in the camel's saddle and told him that she could not move as she was menstruating. (Old Testament Law forbade a man from touching anything handled by a menstruating woman). Later in the narrative Jacob is called by God to make an altar and give up all strange gods. Jacob gathered together the images of his household, including those that had formerly belonged to Laban, and buried them.

From the painting of the same name by Sebastien Bourdon (1616-1671), now in the State Hermitage Museum, St Petersburg 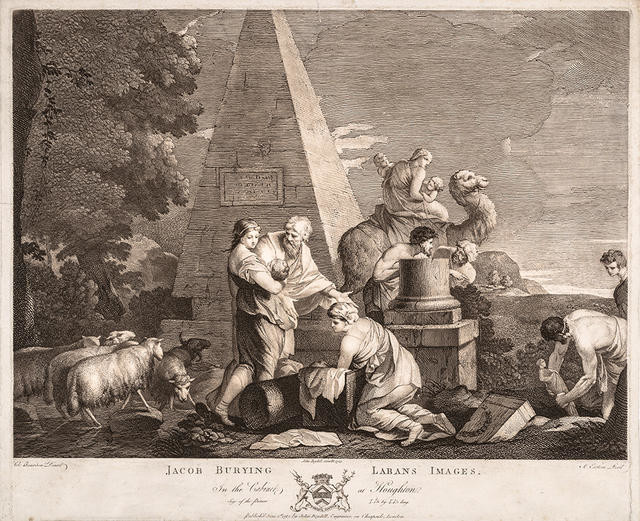