Graham Sutherland’s mid 1920s landscape is a romantic view of a rural Britain untouched by industrialisation. The labourer bends under the weight of his bundle of firewood and the thatched roof of the small building reinforces the sense of a bygone era. Pecken Wood was produced while Sutherland was still a pupil at Goldsmith’s College in the 1920s. Its Neo-Romantic style was influenced by the pastoral landscapes of the Romantic printmaker, Samuel Palmer (1805 -1881). Later in his career Sutherland abandoned printmaking in favour of painting and produced contemporary semiabstract landscapes. Sutherland was born in London. He exhibited with the New English Art Club and the London Group and during the 1930s produced a number of posters for the Shell Company and the London Underground. Sutherland exhibited in the ‘International Surrealist Exhibition’ in 1936. Perhaps Sutherland’s most notorious work was a portrait of Sir Winston Churchill, so disliked by Churchill’s wife, Clemantine, that she had it destroyed. Sutherland was awarded an Order of Merit in 1960. 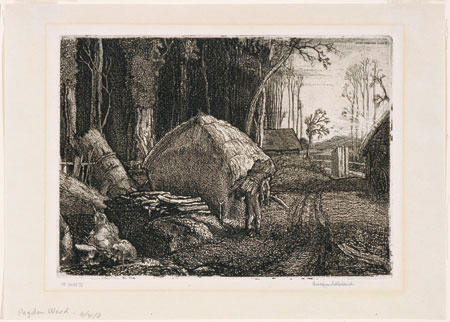