Jacqueline Fraser's elegant installation, The Benediction of Goat Island our Saviour (1998), presents a scene of ceremonial devotion to Goat Island (Mapoutahi), an important pa which was returned to Ngai Tahu as a cultural resource in 1997. Characteristically, Fraser combines prosaic, inexpensive materials, such as wire and electric cable, with luxurious silks and ribbons in a way which recalls traditional Māori binding and weaving. She has created numerous installations, many of which are based on her family marae and her ancestoral heritage, both in New Zealand and Europe.

Monkey Business (1996), by Robert McLeod, has a life of its own. It is a seething, nearly breathing, pastiche of passion and energy. The chaos of body parts in this seven-metre-long painting presents playful eroticism, dripping with colour and intent. McLeod enjoys confronting the viewer's sensibilities with hard surfaces and vigorous paint work and specialises in pushing the boundaries of traditional two dimensional space.

A jigsaw puzzle, hieroglyphics, archaeological relics, magnetic fridge poetry, sign writing – analogies with Richard Killeen's 'cut outs' are diverse and numerous. Since 1978, Killeen has used 'cut outs' – separate acrylic images on aluminium which can be installed in any way – to challenge the modernist construct of singular truth and the verity of the artist's story.

With 253 pieces, book of the Hook (1996), is Killeen's largest installation to date. Not only has he created a tableau of images which explore the 'hook' visually and metaphorically, but he has also invented his own source material, Objects and Images from the Cult of the Hook. This fictious book of illustrations in the style of an anthropological study, ostensibly from the Hook Museum, challenges the writing of history and the invention of cultures. The hook symbols ensnare the viewer and guide her/him through the catchment of images.

In contrast, a moment of repose is offered by the beauty and luminosity of Red Bowl by Karekare artist Anne Robinson. Since 1982, Robinson has been casting glass vessels which are simply defined, weighty and translucent. At 52 kilos, this jewel-like red bowl is characteristic of Robinson's interest in sculptural mass and technical process. For Robinson, the bowl form is a metaphor for human history, the world, the sky and communication. 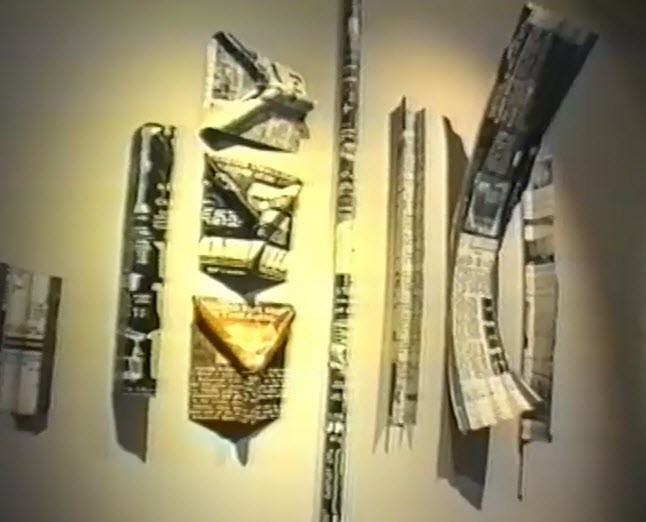 Chance and Inevitability, a work by Richard Killeen