This installation will comprise a selection of 50 works recently acquired for the Gallery's collection.

Since the last exhibition of acquisitions held during June/July 1993: a total of 81 works have been added, improving the representation of artists long established in the collection and including others that are new.

Among the new artists is John Bevan Ford who is now represented in the collection by two pigmented ink drawings; Reading the Swell and Spöring's View of Motuaro, Bay of Islands. Both have symbolic significance and are from Ford's Nga Tohunga Waka series which is concerned in its imagery with Polynesian navigators and navigation. The drawing Reading the Swell focuses on the swell patterns of the ocean which were used in ancient times to determine proximity to unseen land. Ford alludes in this work to storms which disrupt the surface pattern of the ocean forcing navigators to read beneath the surface. This process and skill is symbolised by the red tailed bird (Amokura) which is shown closely interwoven with the cloak (kahu).

The cloak has been a reoccurring image in this series of drawings and is the dominant element of Spöring's View of Motuaro, Bay of Islands. This was one of the drawings made following Ford's study of Maori collections in London museums during 1987. To him a cloak is made from materials symbolic of the land. He has said of this 'When you place a cloak over the land you are talking of the mana of the people and the land'.

The purchase, in April 1993, of a painting by Petrus van der Velden titled Gathering Beet, has advanced a new dimension of this artist's representation in the historical painting collection.

To date the gallery has not held a major van der Velden work that depicts labour, a subject with which van der Velden, like other nineteenth century Dutch realists, was concerned. The ﬁgures gathering beet are villagers of the rural village of Rynsburg which is seen in the background. Rynsburg, or Rijnsburg as it is known today, is close to Leiden in Holland only a few kilometres south east of Noordwijk-Binnen where van der Velden lived from August 1888 until April of 1890. This village featured in a number of drawings and other works made by him prior to coming to New Zealand including a small watercolour study titled Winter in Holland presented to the gallery in 1960 by Mrs Richard Fell.

Among the more notable recent gifts to the gallery has been a set of 20 lithographs by the French artist Jean Rustin presented by Edward Lucie Smith following his 1993 visit to New Zealand. These were originally made to illustrate poems by the French poet and philosopher Bernard Noel but were not eventually published.

The gallery also received The Breton Fishermen and The Balcony by Sydney Lough Thompson, gifted by Mr H. J. L. and Mrs B. G. Harris. The latter painting dates from the mid-1920s and includes a view from Thompson's studio Le Digue which stood near the entrance to Concarneau harbour.

In 1993 the gallery collection also beneﬁted from the estates of Miss Kathleen Hutton, for many years a loyal gallery supporter, and Professor Peter Hadland Davis of Edinburgh. The Hutton bequest included the acquisition of a small woodland painting attributed to Meindert Hobbema which was originally purchased at Christies in London in 1909 by Mr David E. Hutton. Professor P. H. Davis left in his will the option to purchase several works by Frances Hodgkins. Two watercolours were eventually chosen as they would improve Frances Hodgkins' watercolour representation in the collection. The two works were Girls Paddling and Still Life With Red Jar. The purchase was subsidised with a grant from the National Art Collections Fund in London.

The watercolour Girls Paddling is thought to have been painted during July or August 1915 when Frances Hodgkins had a number of pupils painting with her at a small cove near St Ives. On 16 August 1915 she wrote to her mother in New Zealand: 'How delightful it is, so tantalising to be within the sight of so many beautiful things to paint, rocks, pools, skies, paddling children and bits of coast'. The 'bits of coast' were a problem in this location as she was challenged by a policeman, who on several occasions, threatened to conﬁscate her paintings, as painting the coastline was in breach of national wartime security. The other watercolour Still Life With Red Jar was painted around 1930 during a less traumatic period of her life when she was experimenting with different approaches to still life. 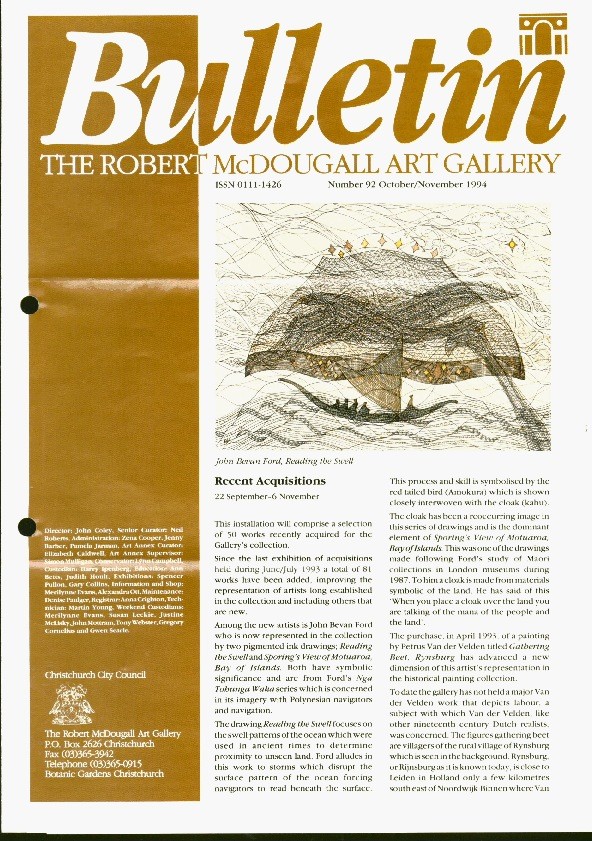 An exhibition of recently acquired works in the Gallery's permanent collections.

An exhibition comprising a selection of 50 works recently acquired for the Gallery's collection.