After Nature: A Survey of Works from 1964-1986 by Gretchen Albrecht

Invitation to the opening of the After Nature: A Survey of Works from 1964-1986 by Gretchen Albrecht exhibition

As Albrecht is frequently seen as one of the major mid-career artists working in New Zealand abstraction this is a timely and interesting 23 year survey of her work. The exhibition was organised by the Sarjeant Gallery, Wanganui and tours with the assistance of the Queen Elizabeth II Arts Council of The N.Z.A.G.D.C.

Gretchen Albrecht was born in Auckland in 1943 and graduated in painting from Elam in 1964. It is from that year that the first drawings and paintings in this exhibition date. Figurative and broadly autobiographical in content these early works are markedly different from the well-known abstract works of the 70s and 80s.

By then the styles of Morris Lewis and Helen Frankenthaler, while perhaps not direct influences, were certainly reflected in Gretchen Albrecht's work. She was painting with vividly coloured thin acrylic washes on unprinted canvas. Nature was an impetus and, as a metaphor, appeared in these works but they were focused more directly on the abstract essences and nuances of colour, light movement and rhythm. "Colour concentrates the feeling. Saturated, luminous, mysterious, intense, enigmatic and visual it assails the senses", she said. These are the elements that became paramount in her Illuminations series of 1977-78.

In 1979 Gretchen Albrecht travelled to the U.S.A. and Europe where she encountered first hand the works of the early Renaissance painters. Paintings such as Piero della Francesca's Madonna del Prato had an intense and long lasting influence on her ideas and her approach and were the main catalyst in a major shift in her painting during the 1980s.

Her new works still made allusion to nature but were also layered with references to the Renaissance painters, to the shapes used by them and to the architectural framework in which their works rest. Arch, vault, dome, cornice, lintel and canopy were referenced by subtle symbol and abstract sign.

In the hemisphere paintings of the 1980s she was "involving art and the body", shaping the canvas and leaving on the semi-circular surface painted trails of her own arm reach; "struggling to unite the inner longing with the outer reality – responding to the mystery and beauty in the act of painting".

"Colour concentrated the feeling", she said. "Saturated, luminous, mysterious, intense, enigmatic, visual – it assails the senses. Contrasts-repose and movement, density and space energy and quiescence". These works of the 80s are probably those we now most frequently associate with Albrecht's works. This survey allows us to place them chronologically in the context of her personal life and artistic development.

The exhibition comes with a comprehensive catalogue and a video interview with the artist. 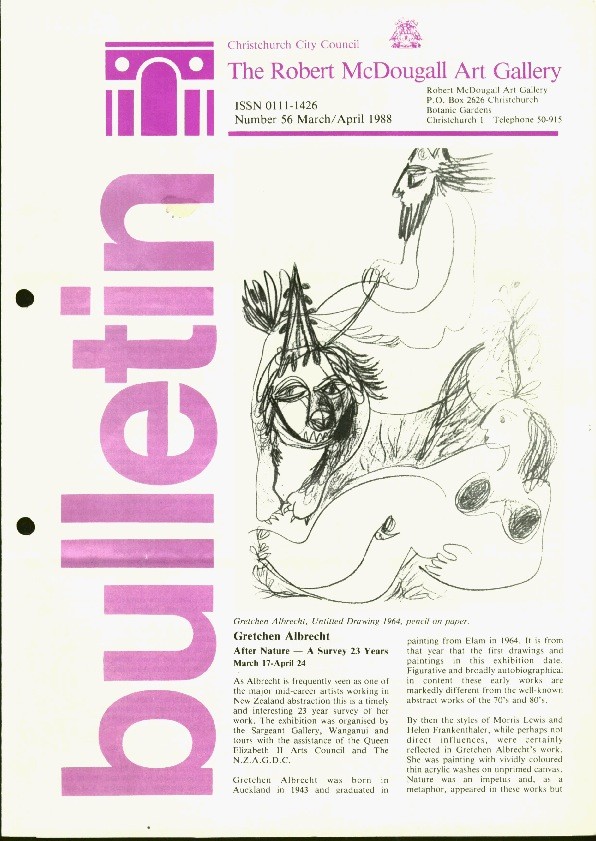