In Deidre of the Sorrows Francis Shurrock conveys the British legend of Deidre, the daughter of King Conchubar of Ulster. It was prophesied that Deidre’s beauty would bring trouble and sorrow to many so her father sent her to be brought up in isolation. Shurrock conveys the young woman’s deep sense of loneliness in this work. Although better known for his sculptural work, Shurrock produced several linocuts during the 1920s and 1930s. Born in England, Shurrock received a Royal Exhibition Scholarship in 1909, which enabled him to study at the Royal College of Art, London. He came to New Zealand in 1923 to teach at the Canterbury College School of Art. He held the position until 1948. Shurrock exhibited with the Canterbury Society of Arts and served on its council. He also exhibited with The Group in Christchurch and with the Royal Academy in London. After his retirement he worked on private sculptural projects. 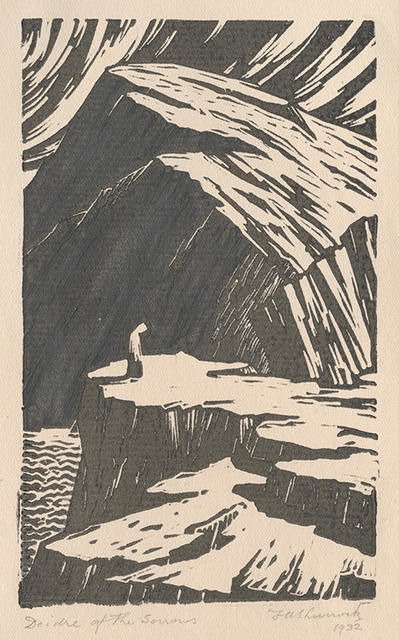