In this Abstract Expressionist portrait, Alan Pearson uses colour to convey a mood, presenting a disquieting representation of his sitter, Mrs Oliver. Her personality is suggested through the flowing paint strokes and her integration into the background hints at a continuity of time and space beyond the figure.

The strong green tones are characteristic of Pearson’s work from this period. Pearson is less interested in the physical body or the room where Mrs Oliver sits, than in the world of the mind and the senses. She appears as a sensual force captured in a spectrum of colour.

Pearson was born in Liverpool but has lived in New Zealand since 1956. He graduated from University of Canterbury in 1961 and during 1965 and 1966, following the award of an Arts Council Scholarship, studied at the Royal Academy Schools, London. Pearson has painted full-time since 1978. He is represented in most New Zealand public collections. 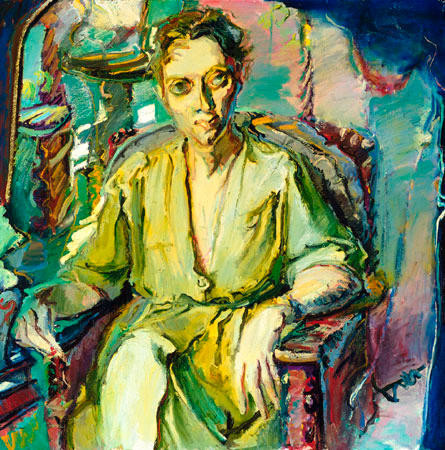