Lamorna Birch favoured painting coastal and country scenes, particularly around Cornwall, where he lived and worked throughout much of his career. The location of this work is unknown but it displays Lamorna Birch’s mature style of the 1920s and 1930s when he was a well-established and popular British artist. Coastal Scene with Ruins is likely to have been completed outdoors and highlights Lamorna Birch’s particular concern with capturing the atmospheric effects of light. Lamorna Birch was born in Egremont, near Birkenhead and, apart from time spent later in his career studying in Paris, was entirely self-taught. He began painting full-time in 1892 and first exhibited at the Royal Academy in 1893. A high point in his career was his election as an Associate of the Royal Academy in 1926. In 1936-37 Birch toured Australia and New Zealand. While in Otago he went on a brief sketching trip with New Zealand artist, Russell Clark. 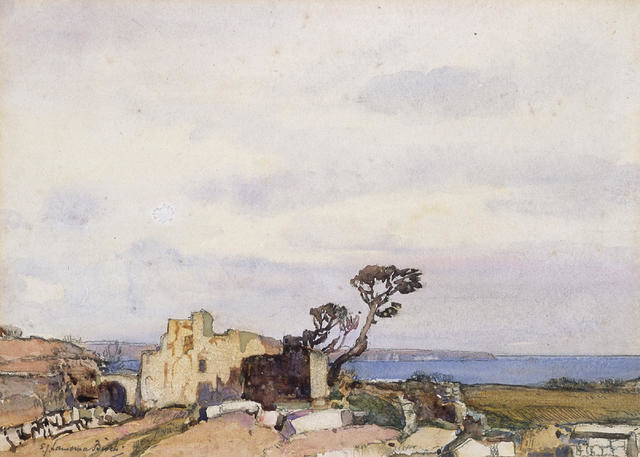