From this and other sources, research for the project delivered much that was unexpected, including a good many signiﬁcant ﬁrsts. It is too diﬃcult not to mention there now being credible evidence for the earliest photographs in Aotearoa New Zealand having been made on our doorstep in 1840s Akaroa.2 It was also surprising to learn that the region’s ﬁrst professional photographer was well-known Canterbury provincial architect Benjamin Woolﬁeld Mountfort, who operated a portrait studio for two years from 1857.3 And there was Derbyshire-born Jane Smith, evidently this country’s ﬁrst professional female photographer from about 1860 and running a portrait studio under her own name in High Street, Christchurch in 1864.4 Along with such noteworthy ﬁrsts, the project naturally delivered personal favourites, including the Tait Brothers, who play a modest walk-on role in Hidden Light – it is satisfying to be able to expand a little on them here. Although not the ﬁrst photographers to reach Te Tai o Poutini the West Coast (three others were there brieﬂy from 1865) like many others they arrived in Hokitika with the gold rushes around 1866, via the earlier Otago and Victoria rushes.5

Born in Caithness in Scotland’s far north, John and Alexander Tait relocated to Edinburgh before emigrating with their parents to Australia in 1852. In Victoria John trained as a “Chemist and Druggist”, and Alexander as a photographer. By January 1862, Alexander was preparing to leave for New Zealand, and by the start of 1864 the brothers were established in Dunedin, running the Caledonian Portrait Rooms; the earliest located account records them with “a camera on the ground” at the Caledonian Society of Otago’s second annual gathering, taking “several photographic views, including one of a group of those present who wore the Highland costume.”6 Their Hokitika venture had begun by April 1866, with Alexander probably there ﬁrst:

Mr Tait, of the well-known ﬁrm of Tait Bros., of Dunedin, has opened a photographic gallery in Revell street, opposite the Prince of Wales Opera House. The specimens he exhibits display the very perfection of photographic art… Mr Tait has already taken cartes of many of our residents and well known visitors, and the ﬁdelity of the likeness will be at once recognised.7

Tait Brothers branched out to open Greymouth’s very ﬁrst Portrait Rooms on Mawhera Quay in early June, advertising “Portraits For The Million” and advising “an early call, as their stay at the Grey is limited”.8 And brief it was – several weeks later they sold the studio to German-born John Tensfeld, a photographer, painter and successful Australian miner.

One of their early Hokitika customers was another German – civil engineer and surveyor Gerhard Mueller, who had been awaiting the opening of a photographic studio on the West Coast. Mueller visited the Taits’ studio in June after seven and a half months exploring Te Tai o Poutini, for most of that time guided by Kere Tutoko, whom he described in a letter to his wife in Invercargill as “the Chief of all the West Coast natives… a strapping fellow – of course what he says is law”.9 Mueller owed both his survival and his success to Tutoko’s knowledge and superior canoeing skills as they crossed swollen rivers by dugout and faced hunger and sandﬂies along the route. His letters include a repeated desire to obtain a photographic portrait with his intrepid companion. 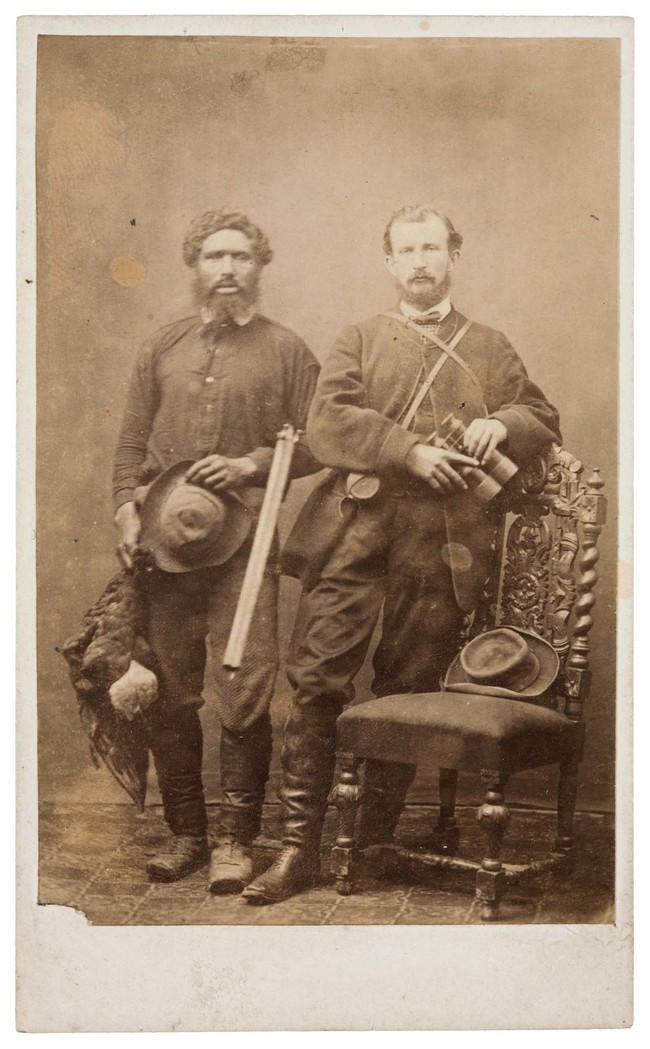 Glimpsed vignettes of John and Alexander’s lives appear: in November 1867 they paid fourteen pounds for the hull of the wrecked brigantine Elizabeth, its lower masts and rigging still attached. In September 1868 they were part of a group of local “Gentlemen Amateurs” that entertained in a beneﬁt concert at the Duke of Edinburgh Theatre in Revell Street with a display of “Electrical, Magnetical, and Magnesium experiments”.10 Four weeks later, the town was pounded by heavy tides, forcing the Hokitika river towards the centre of Revell street and removing twenty yards of river bank, “now within thirty yards of the back of Messrs Tait Brothers’ establishment”.11 By early November they were making news with their art:

There is now being exhibited at the establishment of Messrs Tait Bros., the eminent photographers of this city, a magnificent collection of the heads of the people – all being photographed in the studio of the above well known firm. They are arranged in the most artistic fashion, and reflect the highest credit on the artists. We do not hesitate in saying that the entire picture compares most favourably with those produced by the artists in the old country, and certainly equal to anything hitherto produced in the colonies. As a work of art it is really very excellent, and well worth the inspection of the public. Among the photographs in the group are very many familiar faces residing here, and likewise those that are deceased, or left these shores, rendering the picture at once very interesting.12

By early 1869, however, the Tait brothers were preparing to sell up, Alexander on account of his health preparing to return to Scotland. He never made the move, instead relocating seven months later to Greymouth, where he set up a new studio. Joining the local masonic lodge on his arrival, he entered his profession as “artist”. In June 1870 he published “a very handsome album, containing views both of town and up-country scenery”, also described as “twelve beautiful scenes taken from town and digging life on the West Coast… Each picture … a splendid specimen of high photographic art.”13

Examples of their work also reached Scotland. In 1871 it was reported that:

Under the heading of “Caithness Artists in New Zealand”, that old-fashioned, old, country paper, the John O’Groat Journal says: – “We have this week been favoured with the inspection of a large number of photographic views of scenes in New Zealand, illustrative of the various operations in gold digging. The views are chieﬂy taken from the Hokitika district, and give an excellent idea of the diﬃculties encountered by our countrymen in search of the precious metal. As works of art, these photographs cannot be excelled. They are the work of two brothers, the Messrs Tait, from Watten, in this country; and we are sure they are only to be known, when the gifted artists will receive numerous orders from parties in Caithness who have relatives in New Zealand engaged in the laborious operations of gold digging.”14 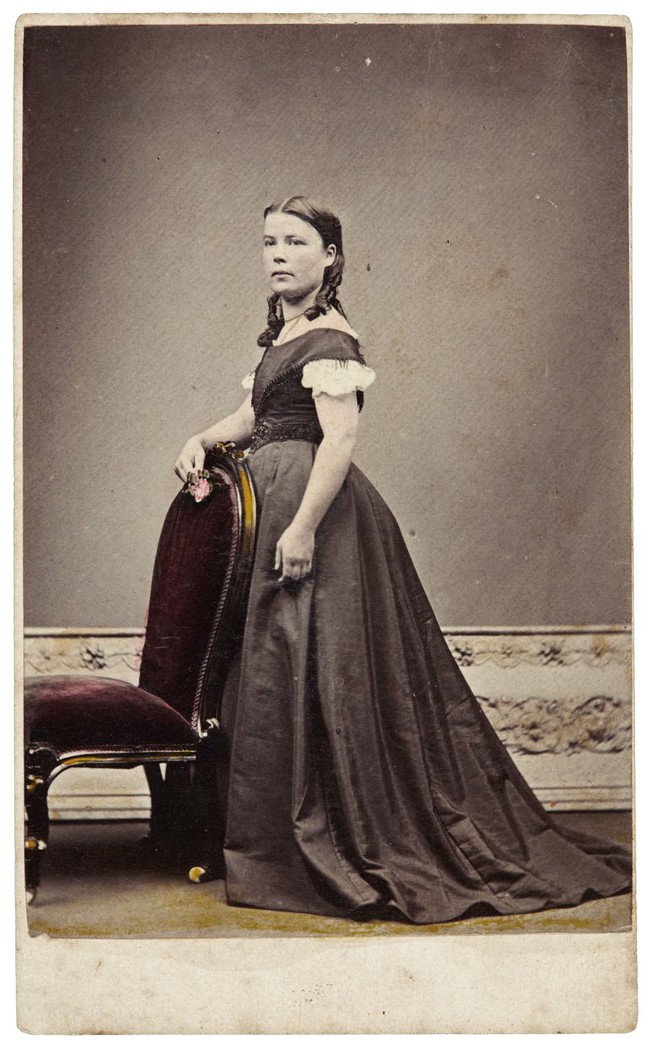 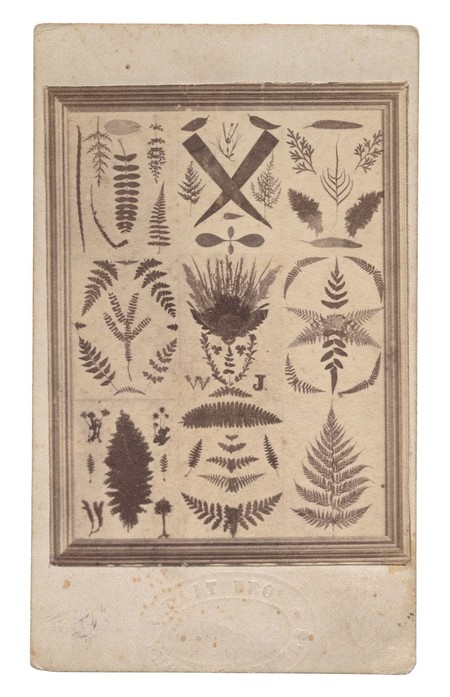 Alexander kept a house on Greymouth’s Mawhera Quay and remained semi-itinerant, working in Charleston and Hokitika. In 1872 the two brothers appeared as shareholders in the Westland Quartz Crushing Company, and updated their elaborate portrait montage, now emblazoned “By Special Authority To His Excellency Sir G.F. Bowen”, as photographers to the Governor. In 1873 they were lined up to photograph the turning of the ﬁrst sod of the Greymouth and Brunner Railway. A newspaper advertisement for the event instructed that “those who wish to have their ‘shadows’ transmitted to posterity will remain motionless for a few moments on the signal being given by the ﬁring of a pistol charge.”15

Commissions also came from Hokitika ironmonger and importer William G. Johnston, who had the brothers photograph his meticulous arrangements of ferns, mosses and ﬂax; his originals were displayed at the 1873 Hokitika Exhibition. In July 1874 Alexander appeared with the Greymouth Amateur Ethiopian Minstrels, in a charity concert to aid Greymouth’s Lunatic Asylum at the Volunteer Hall – he was the Dancing Master in “an entirely new burlesque” titled “The Lunatic Asylum; Or; Dancing Mad”.16 Alexander worked in the North Island from 1876, returning in 1880 to open studios in Westport, Inangahua and then Reefton. John exhibited his photographs at the Melbourne International Exhibition in 1880–81, and was Hokitika’s mayor in 1885–86. He kept a house and shop in Revell Street and stayed active in business until shortly before his death in 1907. Alexander died in Rotorua in 1913.

For all their inventive entrepreneurship, ﬁreworks displays and occasional improprietous entertainment, the Tait Brothers are, like many of their Victorian photographic peers, diverting enough to follow, but the initial and enduring attraction remains their photography. While it is good to be able to lay out a little more of their story, there remains yet more to be uncovered and known. This is especially true for their evocative, sometimes haunting photographs; images which bring a speciﬁc past and place into unexpectedly sharp and revealing view. 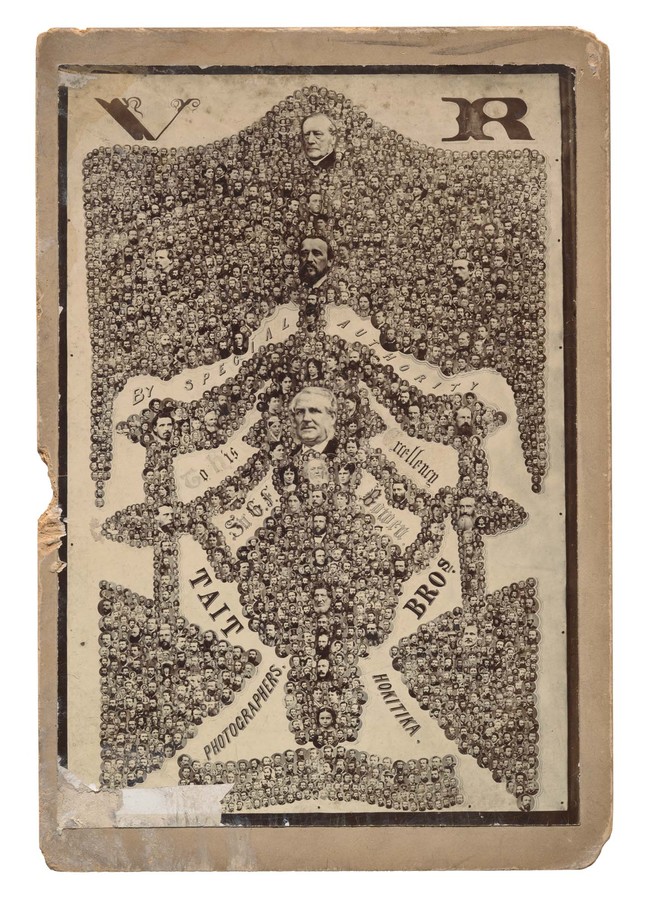 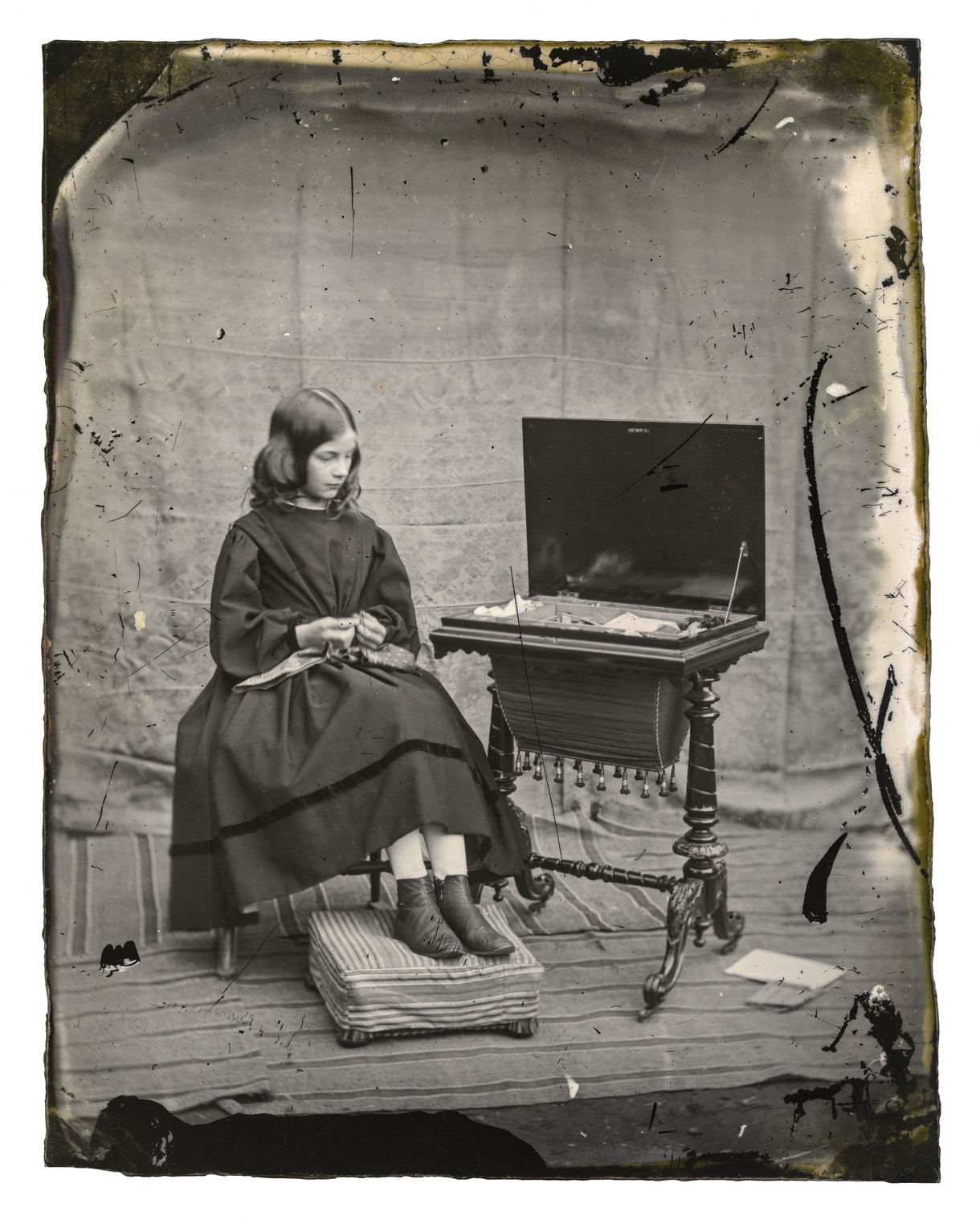 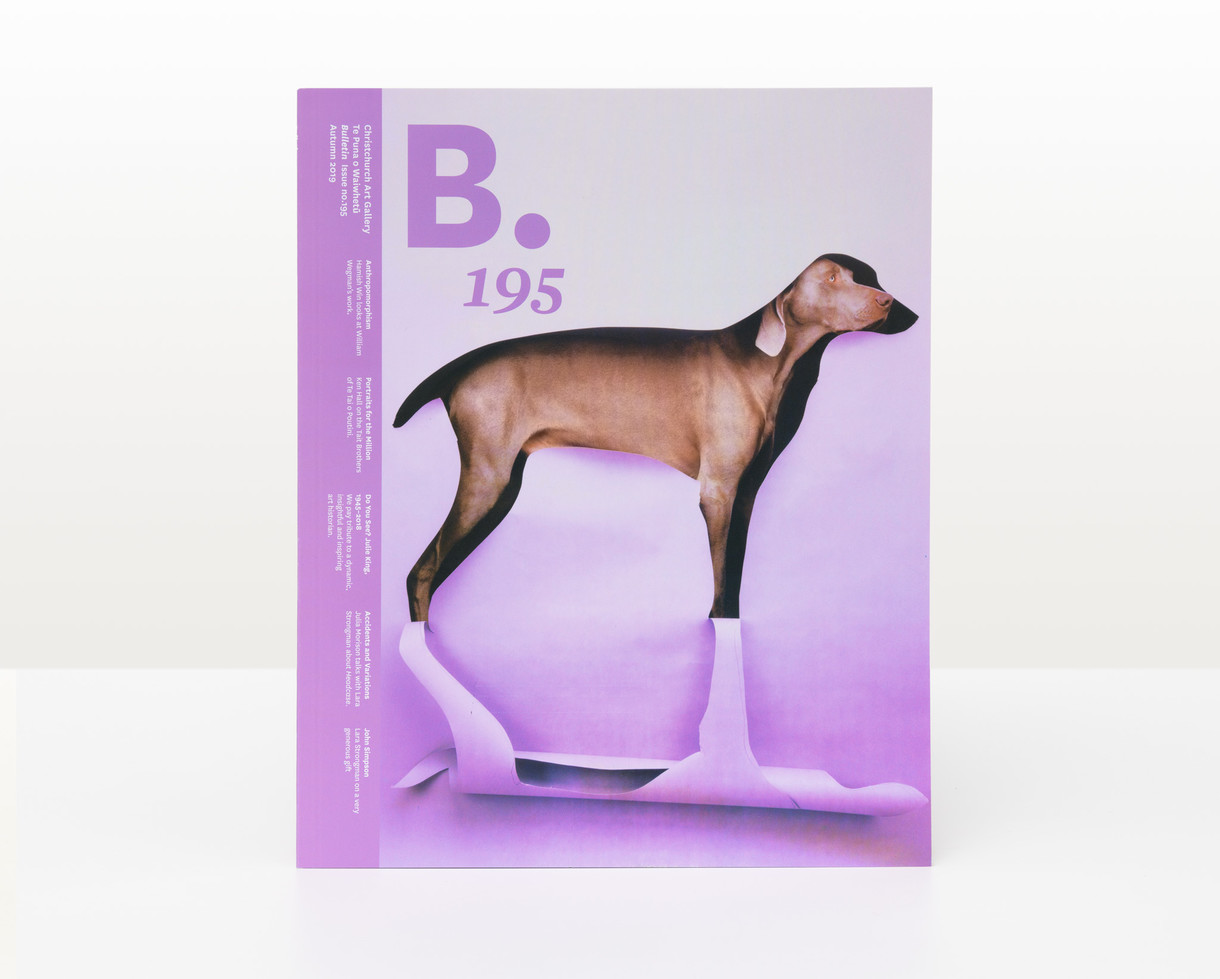