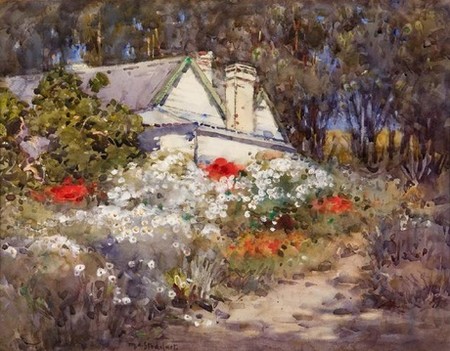 My first trip across to Diamond Harbour from Lyttelton was made on an old wooden ferry during a southerly storm (I think it may even have been the ill-fated Ngatiki, which ended up being pummelled by a Lyttelton Port Company tug). The boat bobbed up and down disconcertingly with the swell as we made our way from the safety of the port into the rougher waters of the Lyttelton Harbour. On the other side, Godley House provided a warm and welcome respite from the cold wind and rain. Contemporary day trippers and commuters have a much quicker and more stable crossing on the modern catamaran Black Diamond, but the ferry ride is just one way to Diamond Harbour—the other involves a spectacular drive south, skirting the edges of the harbour basin past Teddington at its head and then back up the other side. Whichever route you choose, it remains a justifiably popular destination for Christchurch residents.

One Canterbury artist for whom the environs of Diamond Harbour were particularly important was the watercolourist Margaret Stoddart (1865–1934). Stoddart, whose Godley House, Diamond Harbour is one of the Gallery’s most popular paintings, was born in Diamond Harbour in 1865, and the local landscape with its stunning views of the harbour, Godley Head and the steep volcanic hills that surround it, played a big part in the artist’s life. Landscape artists often identify with locations—think Petrus van der Velden and Otira, Rita Angus and Cass, Bill Sutton and the Port Hills, Leo Bensemann and Takaka. Margaret Stoddart’s landscape, her tūrangawaewae, was most certainly Diamond Harbour.

The Ngāi Tahu name for the area is Te Waipapa and the name Diamond Harbour came from Stoddart’s father, Mark Stoddart. He chose it to reflect the way in which the sun sparkles off the harbour’s waters on bright sunny days. Mark Stoddart first purchased land in the area as early as 1852 and continued to acquire more as it became available. Margaret was born in the original Stoddart cottage, a pre-fabricated house that was brought out from Australia around the time of Mark’s marriage to Anna Schjött in 1862 and which still stands on its original site.

Godley House was built on the point that separates Diamond Harbour from Purau in 1880 by Harvey Hawkins, a successful ironmonger, ship chandler and speculator from Lyttelton who purchased the land from Mark Stoddart. Built of brick and iced with cement to resemble solid stone, the large two-storey building had a feeling of spaciousness upon entering it, enhanced by the high stud of the ceilings. A verandah with highly decorative iron lacework surrounded most of the building and granted spectacular views across the harbour to the Port Hills beyond. Having fallen on hard times by the early 1890s, Hawkins was forced to sell this grand home to the Stoddarts and the family moved there in 1897.

This expansive home was a far cry from the family’s original small cottage. Stoddart began painting in the early 1880s, but it was after a prolonged visit to Europe between 1898 and 1907 that she adopted the more impressionistic approach for which she is so well regarded today. Around 1909–13 Stoddart made several studies of Diamond Harbour and the surrounding region. These include paintings of Godley House and the original Stoddart cottage that local art historian Julie King has described as ‘… some of her most memorable images … a succession of paintings of places that had been familiar since childhood …’ .1 Christchurch Art Gallery is fortunate to have four Diamond Harbour works from this period in the collection. 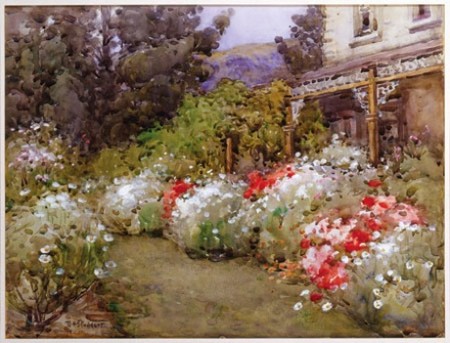 Around 1913 Stoddart completed three watercolour paintings of the original Stoddart cottage—the version in the Gallery’s collection, Old Homestead, Diamond Harbour, features the cottage’s garden in full bloom with red and white flowers bathed in direct sunlight while the path in the foreground is dappled with light filtering through trees. Diamond Harbour is north facing and is well positioned for exposure to the sun even in the heart of winter. This work highlights Stoddart’s deft ability to work plein-air, painting outdoors directly from nature.

Two other works in the Gallery’s collection, Diamond Harbour and Untitled (View of Lyttelton from Godley House) illustrate the expansive views of Lyttelton Harbour that are to be experienced from many vantage points around Diamond Harbour, and the promontory on which Godley House was positioned in particular—views that are as popular today as they were when Stoddart was living there a century ago. Diamond Harbour highlights Stoddart’s skill in combining her work as a landscape painter with that of a flower painter; the almond tree in the foreground being depicted in full blossom, the petals shimmering in the light.

Godley House, Diamond Harbour, however, remains the Gallery’s most popular work by Stoddart. In it, the house appears almost consumed by the flower garden as dense herbaceous border plantings dominate the scene with just the corner of the house visible. The fact that the work is in such tremendous condition adds to its popularity with visitors; it remains a strikingly fresh, colourful and vibrant painting with no hint of the fading that is unfortunately so common with older watercolours.

With the recent demolition of Godley House this painting now carries new significance, representing as it does one of banks peninsula’s lost treasures. As well as being a ferry destination from Lyttelton, for many day trippers Godley House was also a compulsory stopping point for a cold one on the drive home after a day spent at the beaches and bays beyond Diamond Harbour. Those sweltering hot summer days when the strong smell of eucalyptus and pine pervades the area; when the volcanic hills have that parched look and the summer grass is burnt to a beige that contrasts strongly with the refreshing blue-green of the harbour waters. The site remains a wonderful spot to visit and, whether by ferry or by car, still makes for a good escape from the trappings of city living. But I do hope they replace Godley House with a new licensed premises before too long. 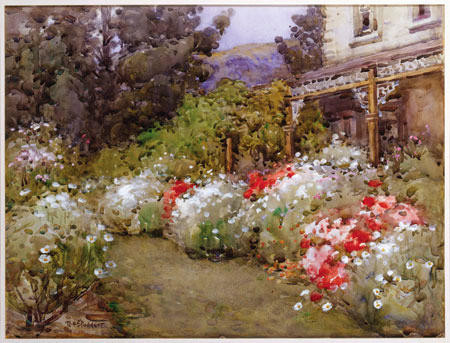 On her return from Europe in 1907, Margaret Stoddart lived in Godley House with her mother and sister and remained there until the family’s Diamond Harbour estate was sold off in 1913. The family were keen gardeners, as can be seen by the charming cottage garden. This is one of a number of paintings Stoddart did in Diamond Harbour and shows the style she had developed during her time in Europe. The expressive opaque watercolour treatment is combined with fine fluid washes applied in a quick and direct manner, out of doors before the subject. Stoddart was born in Diamond Harbour, Christchurch, but in 1876 the family sailed for Britain and she received her early education in Edinburgh. The family returned to New Zealand in 1879 and in 1882 Stoddart enrolled at the Canterbury College School of Art. She was a founding member of the Palette Club whose members were concerned with painting out of doors. She travelled to Europe in 1898.