While in Rome, I thought I'd take a look at the original, by Carlo Saraceni, of this work from our collection... 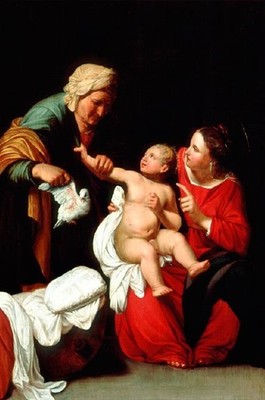 The original is infinitely more subtle, with a gentler palette, rich cascades of drapery (especially beneath the pillow), and an almost impressionist dove struggling to get free. But the biggest difference is immediately obvious, so what is going on here? 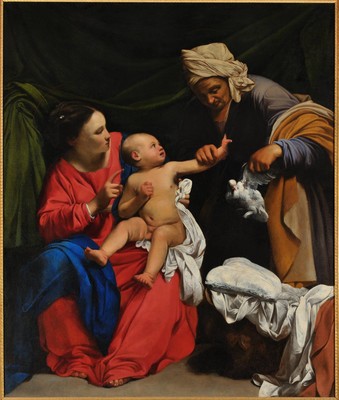 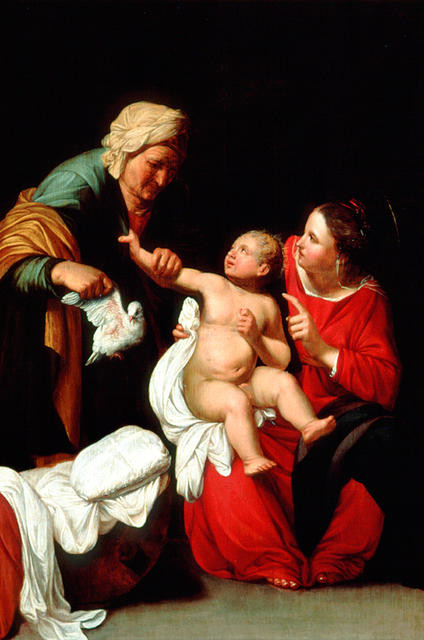 This particular representation of the Virgin, Child and St Anne has its origin in the 15th century. St Anne is depicted holding a dove, a Christian symbol for the Holy Ghost. She is always dressed in green, which symbolises rebirth and immortality, and red, symbolic of love. It is thought that this painting was done by an unknown Flemish master and is a copy of a work by the Venetian painter Carlo Saraceni (1579-1620). Copying was a common practice with Northern European artists during the 17th and 18th centuries. They would often travel to Italy to study and make copies from works in collections. Saraceni trained in Venice before settling in Rome in 1598. He remained active in Rome throughout much of his career. Saraceni was influenced by the paintings of Caravaggio (1573-1610) and Adam Elsheimer (1578-1610). He painted small landscapes peopled with figures as well as religious works, including many large-scale altarpieces in Rome.

The original of this painting is in the Mueso d'Arte Antiche in the Palazzo Barberini, Rome