Visitors are welcomed by a large gateway sculpture, Reasons for voyaging, a collaboration between Canterbury sculptor Graham Bennett and architect, David Cole. The Gallery forecourt incorporates plantings, seating areas and sculptural works. Work No. 2314 by Martin Creed spans the south facing wall of the Gallery.

Our Māori name, Te Puna o Waiwhetū, relates to the life-giving properties of the artesian spring on which the Gallery is built and our role in contributing to the cultural wellbeing of the community. 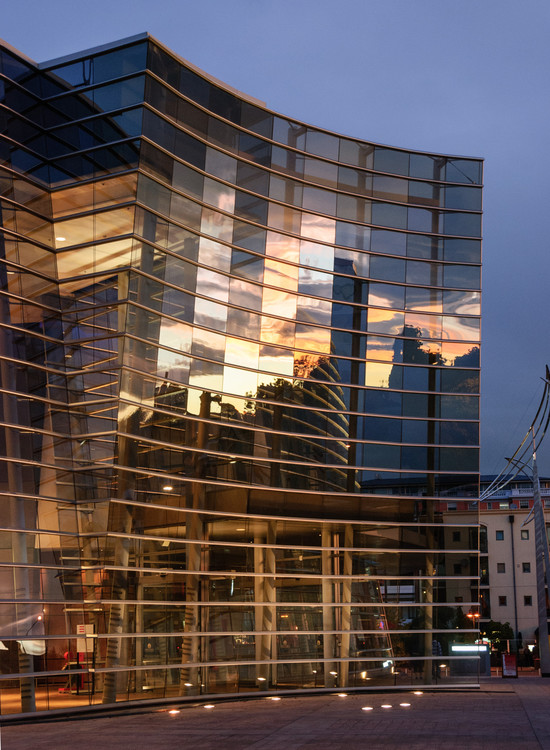 History of the building

The city’s art collection was previously housed in the Robert McDougall Art Gallery building in the Botanic Gardens. However as the collection grew, it became increasingly clear that the building was no longer adequate. In 1996 the site between Montreal Street and Worcester Boulevard was purchased.

In 1998 an architectural competition to design a new gallery was launched. This was the first time in fifty years that a custom-designed art museum had been built in New Zealand. The only rules: the entries must be from architects registered in New Zealand and they had to meet both the functional brief and the budget.

The decision to select the Buchan Group’s design with its spectacular glazed façade, was unanimous. The Buchan Group is responsible for projects including the redevelopment of the historic Sydney GPO and the masterplan for the Victoria Arts Centre. Concerns were aired about the intrusion of a contemporary building into the surrounding heritage precinct with its Victorian Gothic architecture. However the people of Christchurch embraced their new landmark enthusiastically.

The Robert McDougall Art Gallery closed its doors as the city’s public art gallery on Sunday, 16 June 2002, and Christchurch Art Gallery Te Puna o Waiwhetū opened in its place on Saturday, 10 May 2003.

In September 2010 a magnitude 7.1 earthquake triggered a series of thousands of quakes. On 22 February 2011, following an earthquake that devastated central Christchurch, killing 185 people, the Gallery became the Emergency Operating Centre for the earthquake recovery. The Gallery then closed until December 2015, while extensive building damage was assessed, engineering solutions developed and complex repairs carried out.

In addition to the repairs, 140 base isolators were retrofitted to the basement structure. These effectively allow the building to float during an earthquake, significantly reducing seismic stress on the building and its contents safeguarding both people and precious works of art.

The Christchurch Art Gallery Building is now over 100% compliant with the new building code and one of the safest and most earthquake-resilient art galleries in the world.