A series of raw and compelling print works focusing on the civil conflicts of the 1990s by local print artist Michael Reed.

In July and August this year, local printmaker Michael Reed will transform the McDougall Contemporary Art Annex with a multi-media installation protesting armed conflict in the 1990s. The space, which will be activated by screen printed bandages and loose hanging wallpaper with repetitive designs, constructs a battle zone, symbolising the civilian casualties of military invasions/evasions and appropriately marking the end of what has been called the bloodiest millennium in history.

In order to express his belief that 'the admirable aims of the United Nations and its first world hierarchy are, regrettably, under-pinned by duplicity and self interest,' Reed strategically employs text and colour in his work and emphasises aspects of the process of printmaking. The 'shopping mall' language of promotion; the language of termination, the listing of world-wide conflict in the 1990s and the concise phraseology of the paradoxical operation of the United Nations have been integrated into Reed's works. The limited palette of black, white and red is symbolic of truth and blood and also alludes to the earliest printing pigments and the development of print for both protest and propaganda. Reed has also adapted elements of indigenous and Hispanic culture into the design for his wallpaper works. He was influenced by the cut-out, a Mexican folk art practice, and the festivities of the Mexican Day of the Dead, Dia de Muertos, which incorporates older indigenous traditions. A daisy-chain series of silk-screen stencils, with the recurring form of the skeleton, makes an uncomfortable reference to the swastika and the magnitude of the casualties of all wars, both global and civil. Reed's banner works – horizontal rows of silk screen-printed bandages – present compelling and emotive 'binding statements' about the impact of war. The blood red statements summarise Reed's major concerns in a bold and uncompromising way, reinforced by the clarity of the typeface. The cotton crepe bandages are pinned to the wall (a metaphor for uncompromisingly pinning down the facts) and pulled taut to the point of fraying, symbolising the extent to which these printed facts stretch credibility.

Michael Reed was born in Christchurch in 1950. He completed a Diploma of Fine Arts (Printmaking) at the Ilam School of Fine Arts, University of Canterbury in 1969 and a Diploma of Teaching in 1972. Reed has received numerous awards since 1970, including the Jean Herbison Award in 1998–9 and a grant from the Queen Elizabeth II Arts Council in 1991. His artwork is held in both public and private collections in New Zealand and private collections overseas, and he has participated in many group exhibitions including Aotearoa to Antwerp (1998), State Bank of Belgium, Belgium; Part of the Furniture (1997), Robert McDougall Art Gallery, Christchurch; Print and Paper (1993) Kurashiki Public Art Gallery, Kurashiki, Japan and McDougall Contemporary Art Annex, Christchurch and Five New Zealand Printmakers (1991), Memphis College of Art, Memphis, USA. Reed currently teaches printmaking at the Christchurch Polytechnic. 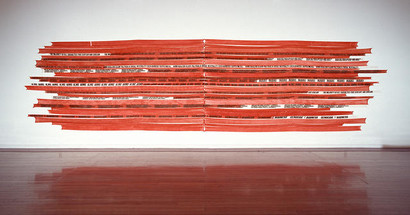