This print depicts the painting now known as 'The Choice of Hercules' by Nicolas Poussin (1594 – 1665), from the collection of Sir Henry Hoare. It is still in Hoare's house, Stourhead, Wiltshire, England, now owned by the National Trust.

Of this painting the National Trust say:
Poussin’s painting shows the muscular Hercules having to choose between Vice and Virtue, symbolised by two women. He looks towards Virtue, dressed in white, who points up towards the difficult rocky path, whilst Vice, accompanied by Cupid, indicates the easier sunlit valley behind. This picture, bought at the Duke of Chandos’s sale in 1747, is one of Henry Hoare’s most important acquisitions remaining at Stourhead. Known as 'The Magnificent', Hoare completed the building of Stourhead (started by his father), amassed notable collections of paintings and sculpture, and created what is probably the most beautiful landscape garden in England. 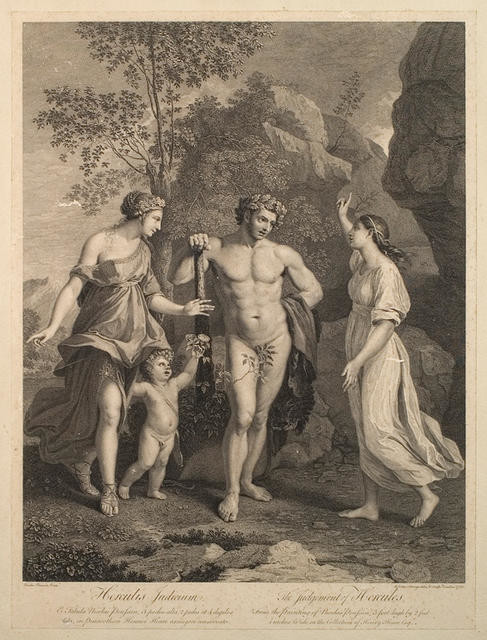