Although this work has been given the title Golden Bay, Nelson, the scene is actually of Tasman Bay and the Waimea Plains. Taking advantage of the high viewpoint offered from the Bryant Range, above Nelson, Gully presents a dramatic, sweeping panorama of the bay with the Tasman Mountain Range beyond.

Becoming one of the country’s foremost watercolourists, Gully travelled extensively in New Zealand. He specialised in large-scale romantic and atmospheric scenes, which earned him the title of the ‘New Zealand Turner’.

Born in Bath, England, Gully was apprenticed to an iron foundry, where he graduated to the designing and drafting department. In 1852 he sailed to New Zealand with his wife and children and worked at a number of occupations until 1860 when he became Drawing Master at Nelson College. In 1863 Gully was appointed draughtsman at the Nelson Provincial Survey Office. He retired in 1878 to take up painting full-time. 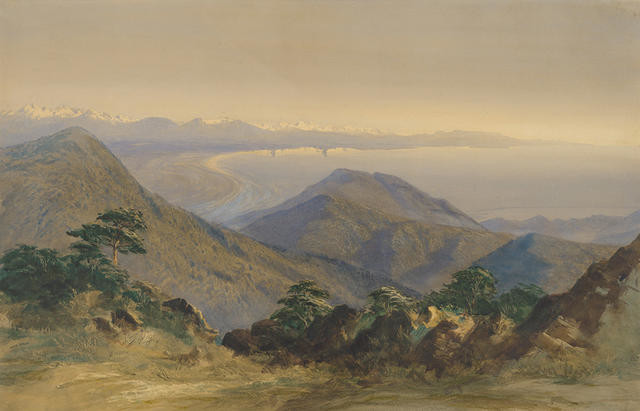