In 1933 James Cook went to Spain, where he settled in Gerona for three years. He completed numerous drawings and watercolours of the town, including this study of ‘The Rambla’. Like many New Zealand artists of the 1920s and 1930s, Cook travelled to Europe to further his art training. In 1925 he was the first recipient of the Rosa Sawtell Travelling Scholarship. By the time he painted this work, Cook had become a skilled watercolourist. The work is tightly and evenly painted, and he has given the composition a sense of clarity by placing an equal emphasis on the background and foreground. Born in Christchurch, Cook studied at the Canterbury College School of Art. He travelled to Europe in 1926, going on to study in Edinburgh, Rome and London. After returning to New Zealand in 1929, he taught at his alma mater until leaving for Spain. He became an accredited war artist in 1939. Cook later lived in Sydney and Perth, but died in Florence. 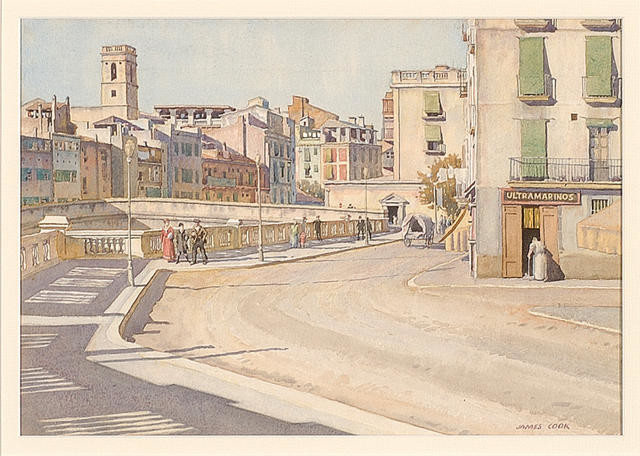