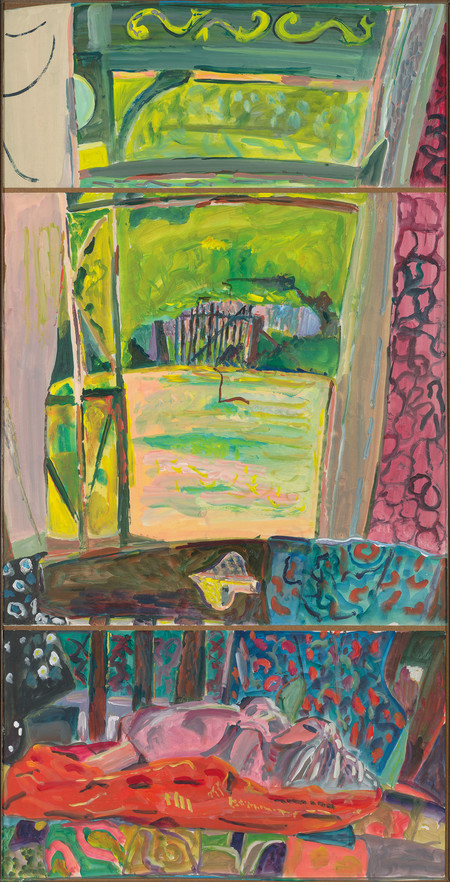 My friendship with Joanna began in 1971 when we were both working at St Dominic’s College in Dunedin. I was teaching Latin and English, she was teaching art. We were almost twins, having been born within days of each other in December 1945. I had never moved in art circles and had no experience of the artists and poets who were making waves on campus and in the city at that time, except for the poet Iain Lonie who was my tutor in the classics department. “Don’t worry about the grammar,” he told me when it came to my limping Greek. “Concentrate on the poetry.” And, of course, I could locate that in English translations. Joanna knew everyone, Ralph Hotere, Hone Tūwhare, Bill Manhire, Ian Wedde, and was even then primarily focused on her life as a painter while still writing some poetry.

The clarity and power of her self-belief, held almost self-effacingly yet stubbornly from the beginning and throughout the years to come, remain for me the greatest revelation. In truth, an inspiration. 1971 was the year in which Joanna painted, on commission from the parish priest, Father Keane, the fourteen Stations of the Cross which are still in the little Catholic church of St Mary, Star of the Sea in Port Chalmers. In the same year and in the very same church, she married Jeffrey Harris. Somehow along the way, caught up as I was in my own life, I missed out on the blessing of the Stations and their initial treasuring and subsequent concealment under loosely hanging Renaissance prints, where they have been safe but for so long, out of sight has been out of mind. Things are beginning to change. This wonderful current exhibition and in particular the six pages of the interior of the church in the beautiful big exhibition book, will give you a sense of what a remarkable piece of work Joanna’s Via Crucis is. Stand close up in front of the six paintings made as proofs that are part of this exhibition. Look into the faces of the women, full of tenderness and grief. The story is timeless. I find myself thinking of the women in Kabul.

In 1981, John and I with our three children and my mother left Dunedin and settled in together in Bryndwr Road, Christchurch. This was quite a tough move for me. There was once again, the public, theatrical, cajoling life of a classroom teacher. And against that, the dream of a stilled life, of a breeze that might blow where it would across the landscape of poetry. “You are so busy”, Joanna wrote in one of her many letters. I denied it but of course it was true. In 1982 I gave her my own commission. To make me a painting based on the words of a psalm. BE STILL AND KNOW THAT I AM GOD. I imagined an oasis of tranquillity, a garden-scape bursting with flowers and foliage, a window perhaps and wind-stirred draperies. Instead, she gave me three big sheets of white paper, each of them pretty much empty, the words of the psalm divvied up between them and printed in faint pencil. One sheet has a small square of blue and a red swish like a ribbon. One has slender columns of dark green painted loosely down each side. One has a brown smear like a haystack in one corner and a little bit of pencilled-in trellis. She had had them framed, one with red, one with black and ne with gold. You could spend a lifetime pondering on this symbolism. At first, I was bewildered, disappointed, I guess. But year after year, the power of the triptych increased. It was like an energy source at the centre of our home. And I did slow down and I did finally embrace a writer’s life but not until 2005. Joanna often stayed with us in Christchurch as she travelled – always close to the earth, never flying – from north to south and back again. And she always left something behind. Once it was a lush red lipstick in a gleaming container placed just so to complement a design in the patchwork quilt on her bed. Another time it was a small square of paper with ‘PAEONY paeonia’ written in her distinctive hand. This instinctive constructing of little altars was evident as Charles Bisley and I moved from room to room in her house in Maxwell Street, Whanganui, after her death in 2003. We were her literary executors and gathered together the masses of folios and folders, the handmade books, the sheets of illustrated poetry that filled the cupboards and floor to ceiling presses and bookshelves. Charles had them all copied and I spent 2005 out here at Amberley Beach in North Canterbury, reading and making choices for a collection to be published in 2006 by Victoria University Press. Joanna had had a healthy number of poems published in her lifetime. Her first book, Imogen, published by Hawk Press, had won the PEN First Book Award in 1978. She had already chosen a title, Like Love Poems, and chapter headings such as ‘Barrys Bay’ for a second book, one she had dreamed of and talked about for many years. What a delight to finally see it out in the world. 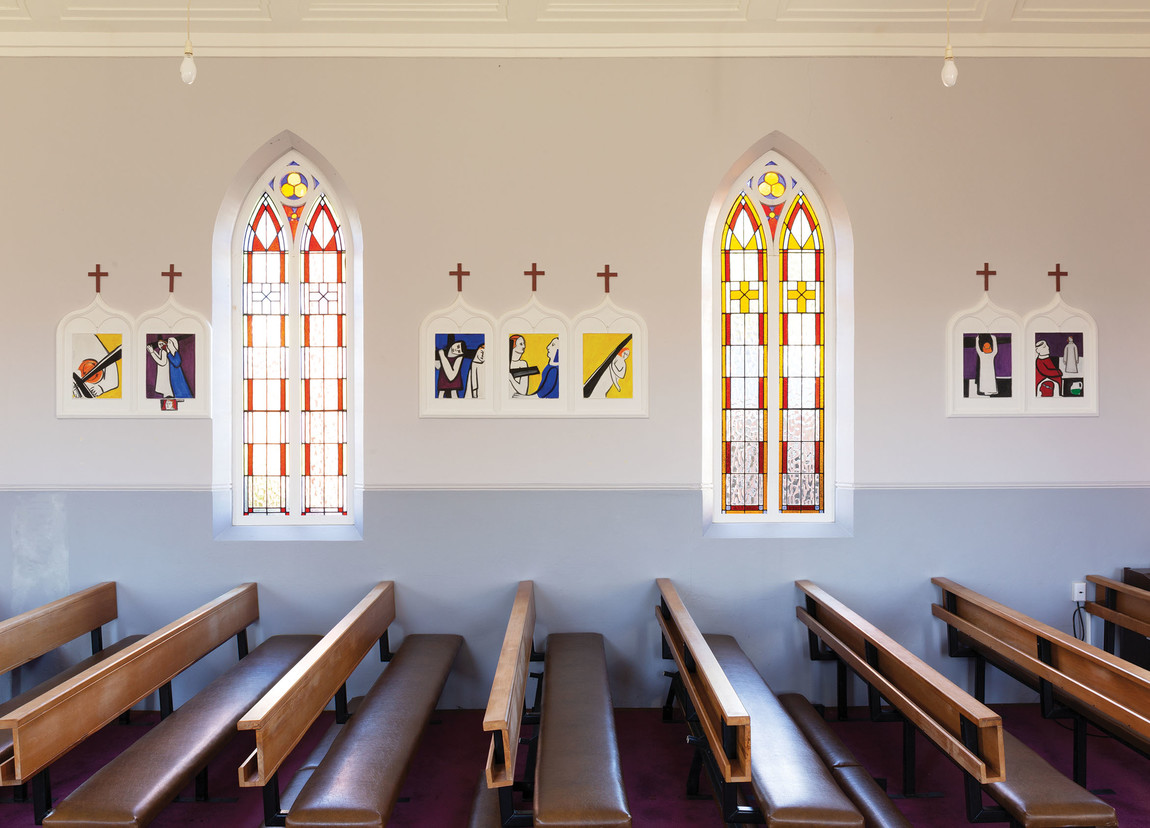 My own very first book, Heartwood, was published in 1989 by Caxton Press in Christchurch. When I look at the author photo now, I think how very young I look. Kind of relaxed but also shy, avoiding the eye of the camera. And there I am saying of my poems “they come from the sharp edge of the crater where I struggle to keep my balance.” The metaphor comes from Akaroa, from the crater rim encircling the harbour. Joanna chose the bright yellow cover and provided six exquisite drawings which float on the page. I knew I could entrust myself and my words to them.

In 1990, Simon Garrett published my second slim volume of poetry, of Elephants etc., in his privately owned, Christchurch-based, untold press. Once again, Joanna came to my rescue. I’d taken her over The Hill to stay in a friend’s bach in Akaroa. Maybe her boys, Felix and Pascal, were with us too. I remember her singing in the house as she bathed one evening. How I sat outside on the verandah, watching a bellbird feeding upside down on a camellia flower. How she sketched a simple line, the dark rim of the crater as it stood out against the pallor of the evening sky and this line divided the two shades of acidic green she chose for the front cover. The first and last leaves of the book are lavender.

My final memory of Joanna is of her dancing in our living room. At times she would creep around, moving awkwardly among us as if she feared she might be in the way. This time she had her husband-to-be, Peter Harrison, with her. She twirled and swung back towards him, her face glowing. She was totally alive, free and flowing with happiness. And this only a matter of months before her untimely death.

In 2000, when I was still an editor for the Christchurch-based literary journal Takahē, I had invited Joanna to be our guest artist for issue 39. We published the eight paintings of the exquisite series Frugal Pleasures, which is on display in this exhibition. It incorporates Latin text from Satire 1, VI by the Roman poet, Horace. She wrote an accompanying essay, ‘The Vanished Simple Good’ which included the following lines: “It’s often a coincidence of thoughts, feelings, and things on the table, that give rise to a painting ... nature and culture on a table, sacred and profane where the table hints at ceremony … This series celebratory & valedictory.”

How marvellous it was to walk through room after room of her artistry, paintings, drawings, films, in Dunedin recently. Then to learn that everything will be here in Christchurch in December. That’s celebratory, for sure! 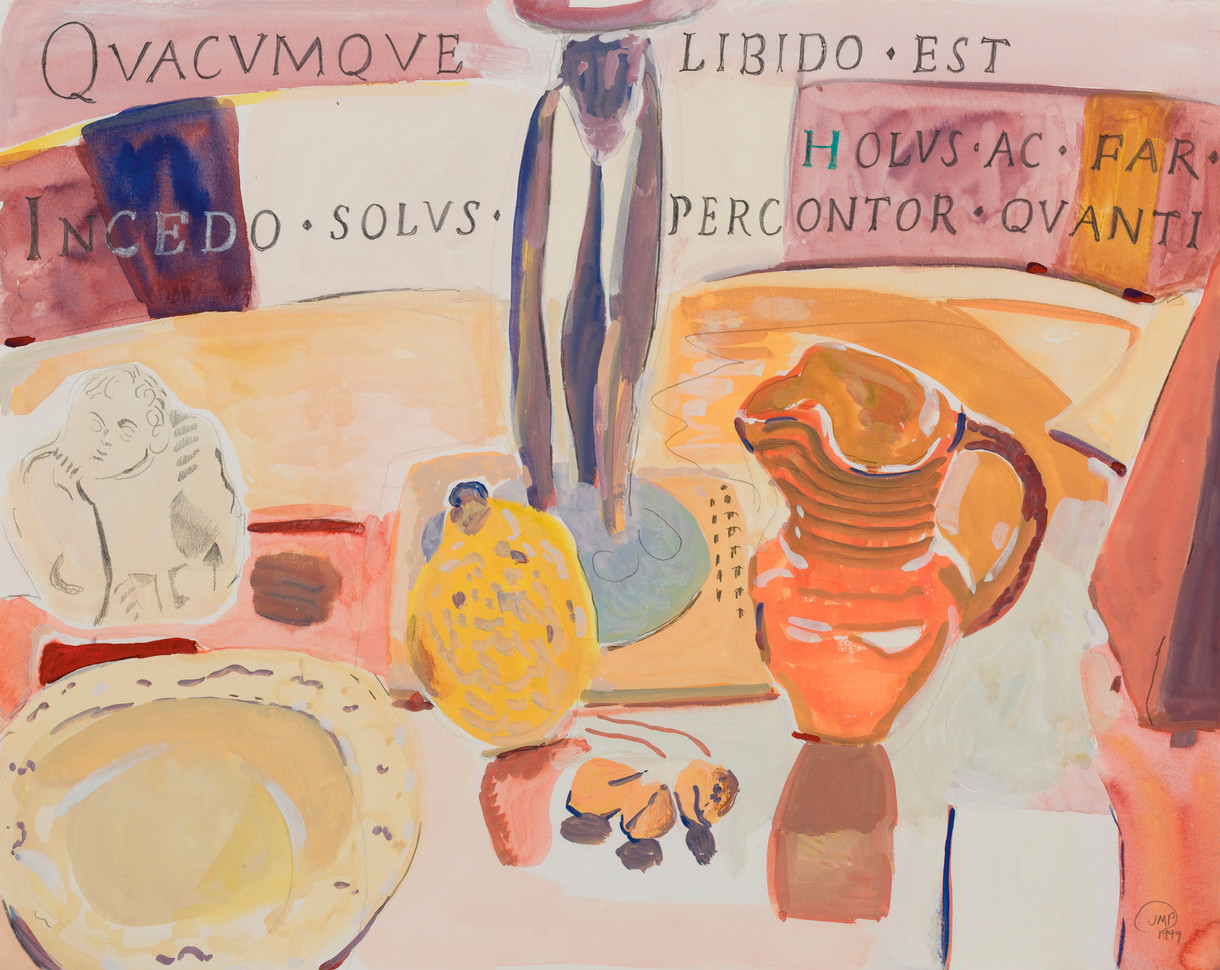 Joanna Margaret Paul: Imagined in the Context of a Room

A major retrospective celebrating the career and legacy of Joanna Margaret Paul. 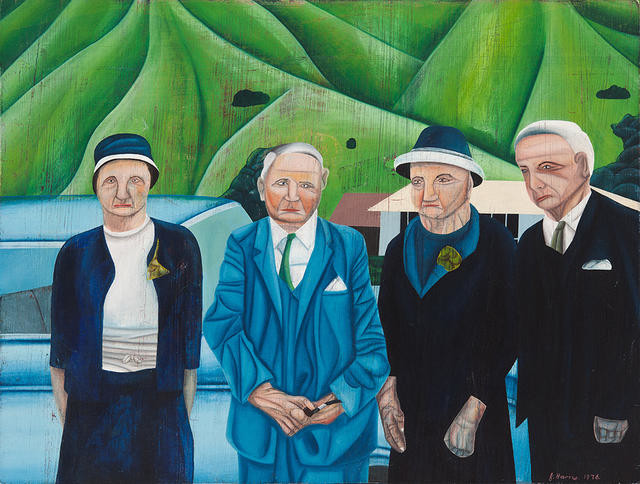 Jeffrey Harris had been living back on Te Pātaka-o-Rākaihautū / Banks Peninsula, where he was born and raised, for about two years when he painted this jewel-like painting, based on an earlier photograph of his grandparents at Okeina / Okains Bay. In his mid-twenties, married, with a baby daughter and living in an old house at Taraouta / Barrys Bay, he was not far from where his family had been farming since the 1850s. Harris had nurtured an inner life through drawing and painting since his teenage years, and gained his art education largely through books. Working from an attic studio at the head of Akaroa harbour, he built a large series of enigmatic family ‘icons’, reinterpreting the visual language of the Italian Renaissance – particularly the work of the 15th-century Sienese painter known as Il Sassetta – to impart a sense of timelessness to his own questioning and unfolding personal history. 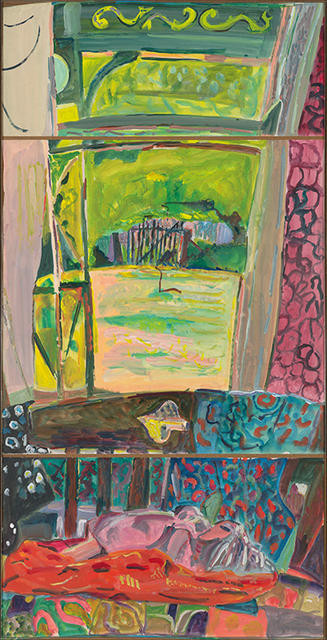 “As a woman”, said Joanna Margaret Paul, “painting is not a job, not even a vocation. It is part of life, subject to the strains, and joys, of domestic life. I cannot paint unless the house is in order. Unless I paint I don’t function well in my domestic roles. Each thing is important. The idea that one sacrifices other values for art is alien to me, and I think to all women whose calling is to do and be many things.” Between 1974 and 1977 Paul was living on Banks Peninsula with her young family. This painting is a view of the garden through her window. Recognising that personal subjectivity was “the only mode of truth”, she made art in a variety of forms – paintings, films, photographs, poems – which collectively function like a visual diary of her daily life. “I am aggressively in support of the minor”, she said. “I like my work to relate to a room rather than a gallery.” She was able to locate a world of meaning in the smallest of gestures and the most domestic of subjects. “I’m painting things like the coffee cups after a visitor has left.” 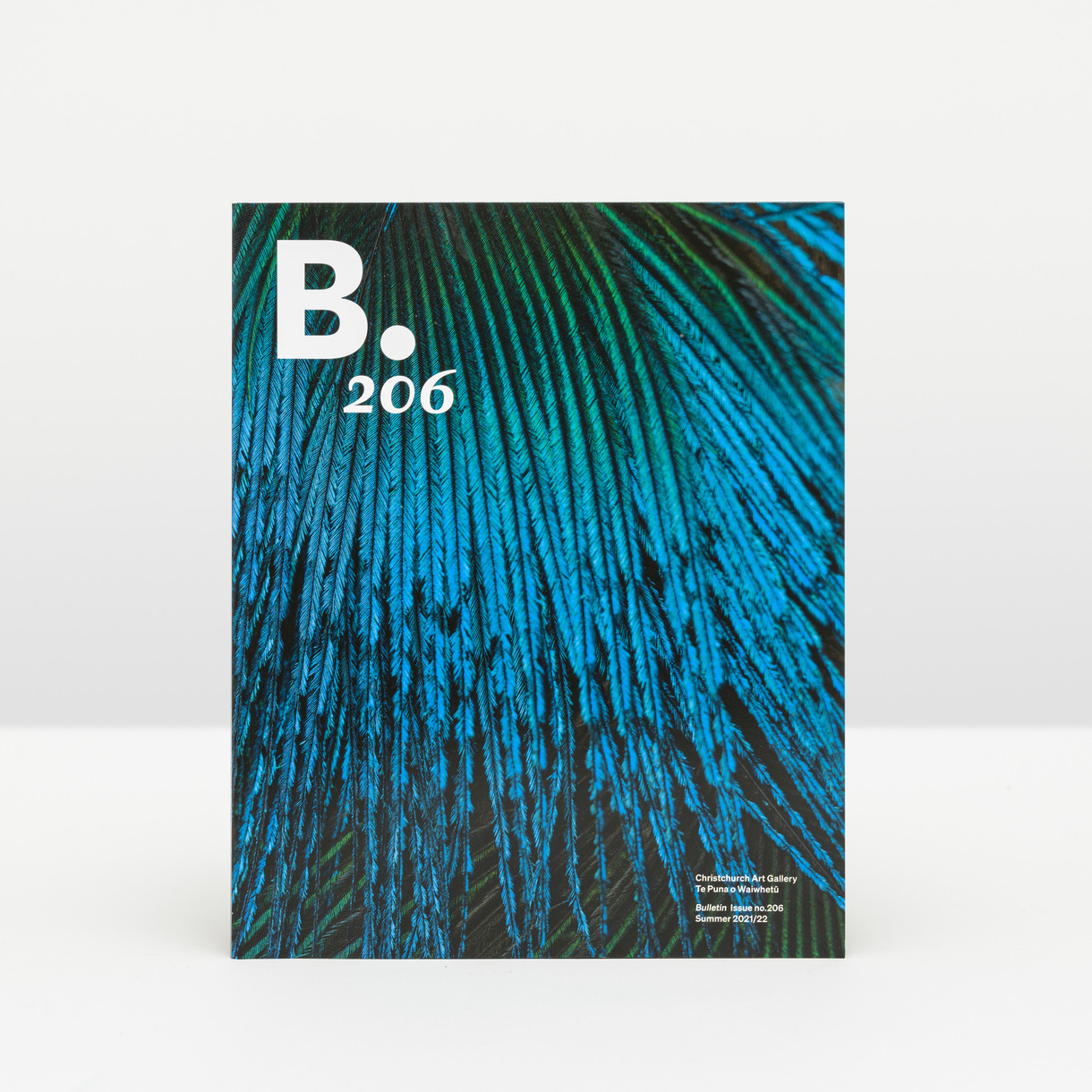