The origins of Jazz, however, date back long before World War 2. In August 1939, using multicoloured paper cut-outs, Matisse created Symphonie Chromatique as a cover for the wartime issue of Tériade’s art magazine, Verve: La Nature de la France. He fled Paris from the invading Germans soon after and had hardly settled into his residence in Nice when Tériade approached him for a special project. The publisher recognised the importance of Symphonie Chromatique and wanted to devote a special edition of Verve to the colour cut-out technique.2 Matisse was doubtful. He did not believe his colour images could be accurately reproduced, and resisted the proposal for over two years. Adding to his doubts was his increasing frailty; he was slowly recovering after two life-and-death operations for cancer and did not think he had the energy for such a challenging task.3 But the publisher’s gentle persistence and reassurance eventually won through.

It was a historic meeting when on 1 June 1943, Matisse showed Tériade his first cut-out designs for Verve. There were four in all – one pair of images named The Clown, and another pair named The Toboggan. Excited by this development, Tériade proposed that they use one of the Clown images as the front cover of Verve and the other in a new project – an album, originally called Cirque, that later became the book Jazz. Likewise, the Toboggan images became the back cover in Verve and the final image in Jazz. Tériade later stated ‘The Jazz cycle was born.’4

Yet Matisse achieved this aesthetic leap by starting his journey in little steps, all the while embracing images that he knew. The Clown and The Toboggan have their origins in a mural called Dance that the Barnes Foundation commissioned in 1931–3. Using the central panel of Dance as a motif, Matisse designed a curtain, called Le Danseur, for the ballet L’Étrange Farandole. From Le Danseur came The Clown and The Toboggan.

Matisse commenced Jazz during a period of turmoil. He was still suffering the effects of his illness; his estranged wife Amélie, along with his daughter Marguerite and son Jean, had joined the French Resistance; and his new home town was bombed on 30 June 1943 while he was working on Jazz, causing him to flee once again, this time to Vence. Consequently, Jazz has a political dimension and its colourful and violent images are replete with subtle patriotic codes that signify aggression, danger and the oppression of the French people.

Using scissors, Matisse cut his shapes from hand-coloured paper, while his assistant Lydia Delectorskaya would pin the cutouts on the wall, repositioning them until the desired balance of form and color was achieved. The finished composition was used to create the stencil for hand-printing using a technique called pochoir.5 Matisse had full control of Jazz: he conceptualised the pictorial themes, created the visual structure, designed the typographical layout. He sequenced the text and images not on the date of creation or on aesthetic themes, but on his own judgement of visual balance. His images spill across the whole page and omit the pictorial borders many artists prefer for their images.

Perhaps the best-known image in Jazz is that of Icarus. In the fable of Icarus, he escapes from captivity with waxed wings, but flies too close to the sun – the wings melt causing him to fall through the stars to his death. In Jazz, Icarus is disguised as a trapeze artist, flying through the air with circus spotlights in the background. But Matisse’s coded transmutation of Icarus is the Nazi execution of the resistance parachutist, guns flashing as bullets pierce the heart of the falling limp body.6 It is also possible that Icarus represents Matisse’s fears for his daughter.

The Swimmer in the Tank is another Icarus-like image – supposedly a circus diver in a tank, it can be interpreted as a similar wartime protest, a representation of a body floating in the river. Matisse presents the ringmaster, Monsieur Loyal, as an acknowledgement of the exiled leader of Free France, General Charles de Gaulle, wearing his signature cap and with his gold uniform buttons arranged along either side of the image.7 In contrast, the Sword Swallower, a picture of an unattractive individual with three swords almost completely immersed in his mouth causing the neck to bulge, is a reference to the Nazi occupiers. Matisse claimed that he made the head small, ‘because a sword swallower is not generally a refined person.’8

Another image of protest asserted in this paper is The Knife Thrower. The knife thrower on the left, who represents the German occupiers, has a knife in hand aiming at the woman on the right. The woman, Marianne, a historic symbol of France, raises her arms up high with her heart shown as the target. The Wolf, a most unlikely circus animal, is a menacing-looking creature with a red eye and references the Gestapo.9

After he completed the series, Matisse found the glare from his bright images too overpowering and wanted to give his eyes a rest as he viewed them. He hit on the idea of inserting pages of his own large black handwriting between the colourful pictures as a visual pause.10 He insisted that his writing was not to explain or interpret the images but formed a visual accompaniment. Tériade published Jazz with twenty cut-out images to almost universal praise. But Matisse did not think that the reproduced images showed the dynamism of his original cut-outs.11

After Jazz, Matisse never again used cut-outs in another artist’s book, preferring instead to return to his line drawings. However, it was while he worked on Jazz that he realised that his découpage works could develop as a different art form. Jazz represented a turning point for Matisse and, inspired by its potential, he went on to create the monumental découpage images that were to win him so much acclaim throughout the world. 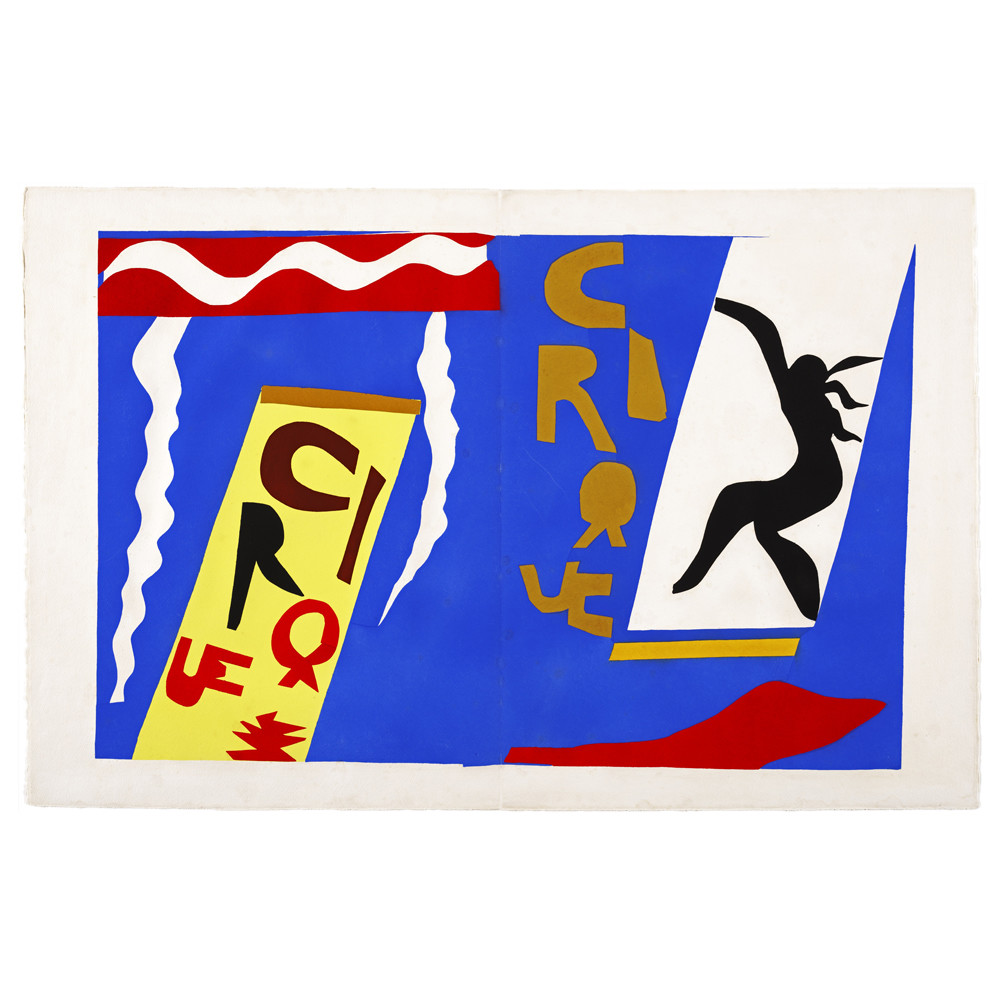 One of the most-loved artworks of the twentieth century