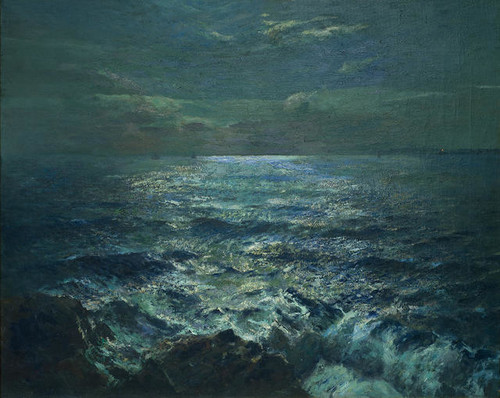 When a sentence begins ‘We all have open minds, but…’ you can be pretty sure that the writer is about to demonstrate the exact opposite. In 1937 painter Julius Olsson said ‘Although we all have open minds about things and are willing to admit beauty in any particular kind of walk, there is much of this new stuff about which is really appalling. Anyone can copy one of the modern pictures and one would be unable to tell it from the original. It is done with splashes of paint, and in such a manner that you do not require any ability.’

Olsson’s obituary, four years later, described him as ‘a romantic naturalist of the old school whose canvases have earned wide appreciation in the many municipal collections in which they are held’. Ouch.

Amongst those municipalities that collected his work was Christchurch, when, in 1912, ‘Moonlight’ was purchased by the Canterbury Society of Arts for £85, the cash coming from the funds left some years earlier by John Peacock.

Olsson was born in London in 1867 and was one of the very first painters  to move to St Ives – the small Cornish port that would become Britain’s most important artists’ colony. He was a passionate sailor. His deep knowledge of the sea, the way it moved and rolled, the way the light fell and the way spume spread and colours danced, allowed him to paint it with great skill. The problem appears to have been that this is all he could do and as the decades passed, he was still producing - and it must be said selling - paintings from an earlier era. And pretty much every one of them a seascape.

His reputation at the time the CSA made this purchase was high. Although self-taught he became a member of the Royal Academy. One work was bought by the Tate. The reviewer in ‘The Studio’ called him ‘Our greatest sea painter’ and numerous mentions in New Zealand newspapers indicate that he needed no introduction. But the outgoing tide left him stranded: his obituary in ‘The Times’ was decent if patronizing, but by 1952 the same newspaper called his work ‘laborious’ and he ‘a complete amateur’.

This is very much a painting that repays a visit to the Gallery, where it is what it is: big, bold and defiant. Top right is the dot of the Godrevy lighthouse. Under the brush of Julius Olsson, in 1910, the lighthouse was a useful marker of scale in a large painting and perhaps a reference to the real importance of lighthouses as navigational aids to sailors.  By 1927 – just 17 years later – through the pen of Virgina Woolf the very same lighthouse had become a symbol of the unattainable, the complexity of human relationships, the creative process, even the human condition itself. Modernism had happened very quickly and Julius Olsson’s ship had rather run aground. 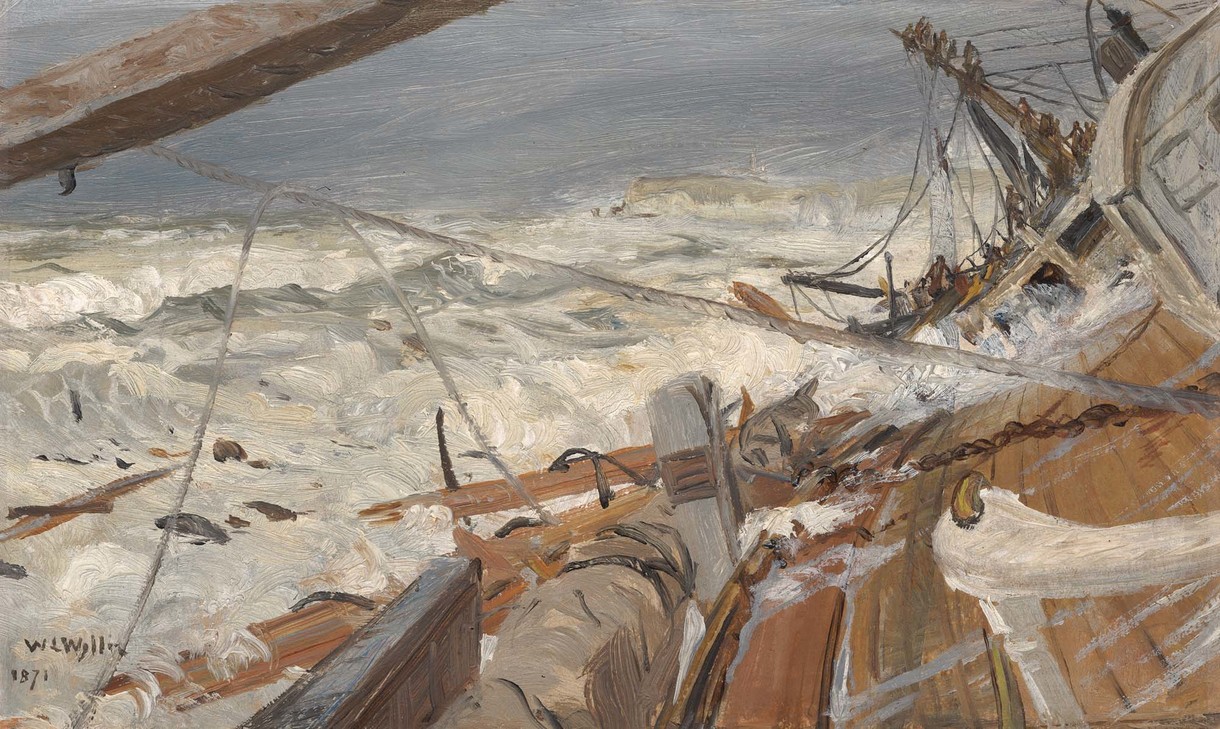 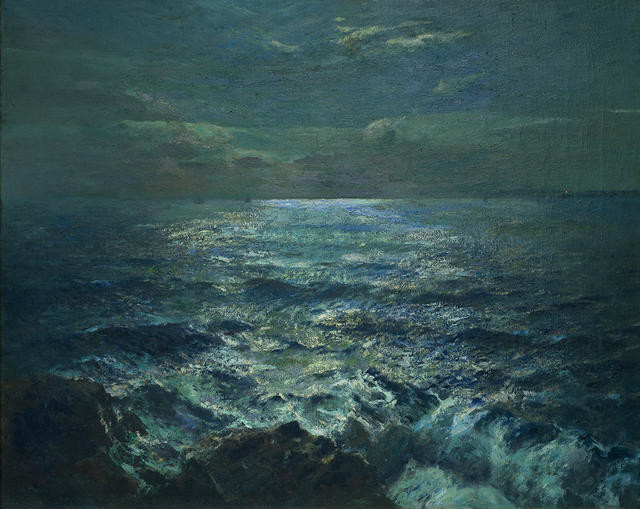 This work depicts St Ives Bay. To the right is Godrevy lighthouse. 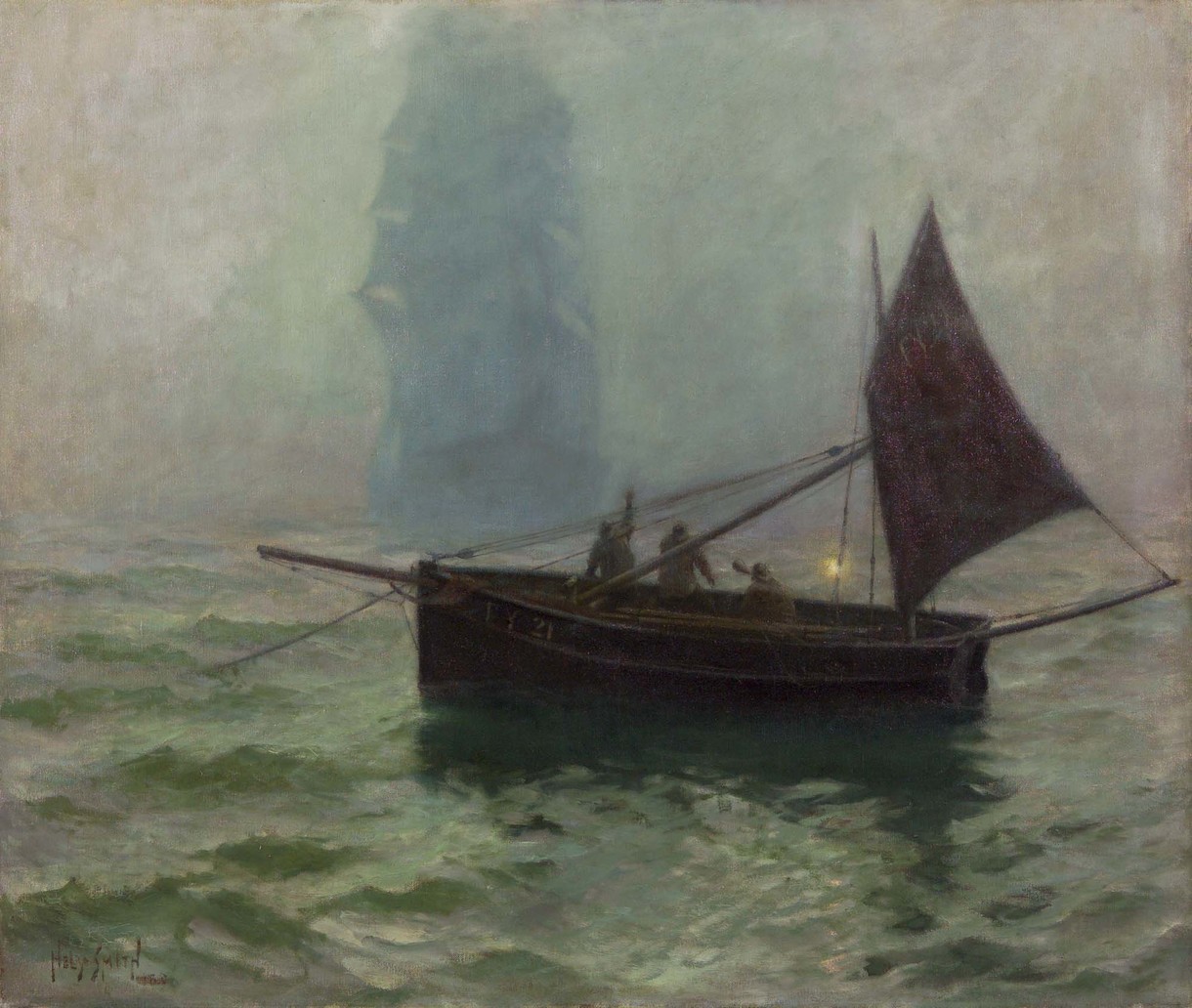