This article first appeared in The Press on 8 June 2005

In 1965, when Large Kitchen Composition was painted, Michael Smither was a young, emerging artist on the verge of broader success. Since completing studies at Elam Art School in 1960, he had held a number of solo shows in Auckland, New Plymouth and Wellington, returning to his hometown of New Plymouth in 1962, and marrying in 1963 (the future writer) Elizabeth. He was also a new father. 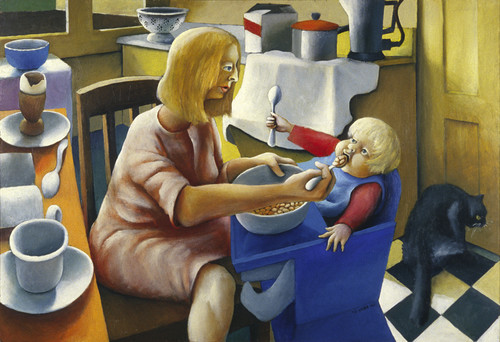 The birth of Sarah in November 1964 sparked a major new theme in Smither's work, one that would coexist alongside the iconic mountain and rock pool series for which he was becoming known. Drawings of Sarah filled his sketchbooks, then in his distinctive hard-edge style he painted her at nappy change; oblivious on her tiny swing; clutching cups, spoons or wooden toys; feeding the cat or bathing dolly; bouncing blissfully on the bed; making room for brothers Thomas and Joseph.

The theme of children had attracted little serious attention in western (especially 20th century) art, so it was an interesting direction. The paintings were tender and heartfelt, yet managed to avoid the potential pitfall of sentimentalism. Sometimes, in fact, Smither's direct, unflinching view could upset viewers, who found aspects of the works ugly or questionable. Smither was hurt by such criticism, having forged his direction with honesty and fortitude, and producing work that was an authentic outcome of his own life, observations and inspirations. Others who had influenced this path included such diverse sources as Pierre Bonnard (innumerable wife-in-bath paintings), Stanley Spencer (chunky figured mayhem in Cookham) and Walt Disney comics (the glorious technicolour). In a work titled Homage to Walt Disney, Smither showed a slightly older Sarah reading a comic, and later described it as "Sarah being me as a child". To a Herald reporter during this period he explained, "My work is very much tied up with my life, with my childhood which I am rediscovering through the eyes of my daughter..."

In 1965, a visit to New Plymouth by Australian art historian and critic Bernard Smith saw the next piece of Smither's story progress as Smith - in New Plymouth to advise on setting up the Govett-Brewster Art Gallery, viewed and was much taken with Smither's work. Arranging an exhibition (of 64 paintings) for him in Melbourne in 1966, Smith wrote "Smither impresses me deeply as one of those rare beings, a natural painter ... I mean an artist who uses paintings as a language which reveals every aspect of his personal experience." (quoted in Michael Smither, Painter, Trish Gribben, 2004).

Large Kitchen Composition tells of an everyday experience that is also a universal moment. While clearly Sarah can now grasp a spoon, it's still to Elizabeth (securing bowl with heavy grip) to promise transferral of baked beans from shiny pool to waiting mouth. This is a shared moment, a dual portrait recording a place where every parent (read mother) has been. Infused with life and strong colour, this domestic interior could also be any New Zealand suburban 1960s kitchen. A close, tight composition, with hard light falling from behind on mother and child, it is full and busy, but not completely claustrophobic - only the cat seems obviously desirous of escape. On the orange bench sits an empty cup, a bent spoon, a broken egg, and yes - a half-read book. Elizabeth's own writing, we recognise with foreknowledge, is on hold, though time for this will come.

For the present this other talent - the future writer - is constrained by the bright, mixed, mysterious blessing of family life. While Elizabeth's expression in the painting is intent and practical, Michael later confesses "I saw that, like so many women, Elizabeth was a good mother but often wondered what she was doing there." With marriage relationship and roles being redefined around parenthood, as companion and lover becomes mother to this cherished creature, nature is working, with nurture to the fore. For some ten years from here Elizabeth will be painted changing nappies, protecting children in embrace, close-up with crow's feet, naked, even head in a book (obscuring face, enigmatically titled ‘Untitled'). At the close of this period, Elizabeth will go public with her own gift, in her first book of published poems, Here Come the Clouds (1975). Five years after that she would pay her own direct tribute to Sarah's early years, in a modest gathering of remembrances titled The Sarah Train, a poet's gift to a daughter farewelling childhood.

Michael Smither has always been aware that audiences brought their own experience to his images of childhood, and has often expressed his enjoyment of making works that celebrate ‘the ordinary'. 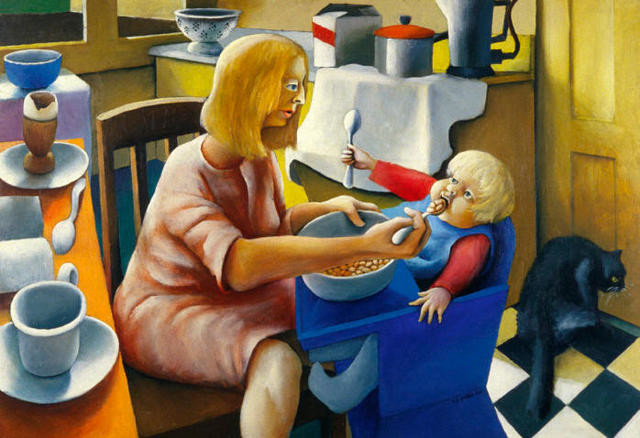