This article first appeared in The Press on 17 November 2004

The 4th November 2004 marked the centennial anniversary of the death of the Canterbury artist, William Montague Nevin Watkins (1835-1904). Having lived in Akaroa for most of his life Watkins, known as ‘Will the artist' to his friends, produced a substantial body of paintings relating to Banks Peninsula, particularly of Akaroa's inner harbour. The scene which unfolds in Akaroa Harbour is one of the best known and loved views of Banks Peninsula. It is as popular with today's mosdern tourists who care to make the drive over the winding road from Little River to Barry's Pass, known as the Hilltop, as it was with travellers of the 19th century. The sweeping panorama offered from the vantage point of the Hilltop provides an impressive view of Akaroa's upper harbour with Barry's Bay and the distinctive tear drop shape of Onawe Peninsula directly below. Akaroa, nestled into the hills and valleys below Stony Bay Peak, is to be seen in the distance. The breathtaking scene invites the tourist to descend down into the harbour and explore the beautiful landscape below. 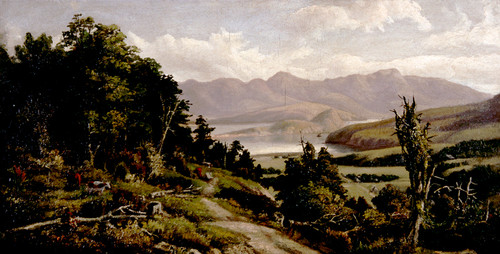 Akaroa Harbour was a popular destination for Victorian artists, including Nicholas Chevalier and John Barr Clark Hoyte who visited Banks Peninsula in 1866 and 1875 respectively. As with contemporary tourists they too were captivated by the spectacular view from the Hilltop which they depicted in their paintings. However it was Akaroa's resident artist, William Watkins who repeatedly explored and painted some unique and wonderful images of the Peninsula landscape.

Although undated and unsigned, as were many of Watkins paintings, Akaroa Harbour is undoubtedly by Watkins' hand and probably dates from around or just after his period studying in Melbourne during the late 1870s. The painting is well balanced with a rough track leading off through the centre of the composition. The cattle and bush in the foreground are also convincingly rendered.

On one level Watkins' portrays a serene, picturesque landscape, where cattle wander contentedly amongst the native bush. It is a peaceful scene where an abundance of pasture in the valley below suggests an ideal climate for productive farming. These elements in the composition can also act as poignant symbols of how dramatically the nature of the Banks Peninsula landscape changed throughout the 19th and 20th centurys. They point to processes of change in the appearance of the landscape with the arrival of European settlers. Dead trees, branches and tree stumps hint at the destruction of native bush which once had such a large presence on the Peninsula. Demand for quality timber and the resulting expansion of farming activity, including a lucrative cocksfoot industry, contributed to a large majority of the Peninsula's native bush disappearing literally in a puff of smoke.

Watkins was born in London in 1835 and arrived at Lyttelton in December 1850 on board the Cressy. His father, Dr Daniel Watkins, was the Surgeon - Superintendenton the Cressy and had acquired land in Akaroa which the family took up shortly after their arrival. Any early interest Watkins may have taken in art were hindered due to the fact that there was no art school in the region until the Canterbury College School of Art was established in Christchurch in 1882. Watkins is also known to have taken drawing lessons under the Lyttelton draughtsman Edmund Norman in the mid 1850s. In 1860 Watkins' older brother Stephen arrived in Akaroa. He had studied art in London and no doubt would have provided further advice for William.

By the 1860s Watkins had developed into a competent amateur artist, being largely self-taught his paintings were slightly naïve in style. In 1876, encouraged by Julius von Haast, he made the decision to study painting in Melbourne at the Victorian Academy of Fine Art where he studied under Von Haast's friend, Eugène von Guérard. Watkins was exposed to a formal academic training system which encouraged students to copy paintings in the National Gallery of Victoria. His style developed closely to that of Von Guérard's with an emphasis on close observation of nature, carefully balanced compositions and picturesque subjects. After completing his studies Watkins returned to Akaroa in late 1878 and attempted to establish a career as a professional artist. He exhibited with art societies throughout New Zealand and also showed works at the Victorian Academy of Fine Art. By the 1890s Watkins style remained largely unchanged and appeared old fashioned when compared to contemporary developments in New Zealand art. In 1892 a reviewer for the Lyttelton Times commented that "Mr Watkins ... would secure better results with a freer and broader style, and with a brighter range of colours." (L.T. 19/4/92 p.5). He last exhibited with the Canterbury Society of Arts in 1896 and died in Akaroa on the 4th November 1904. 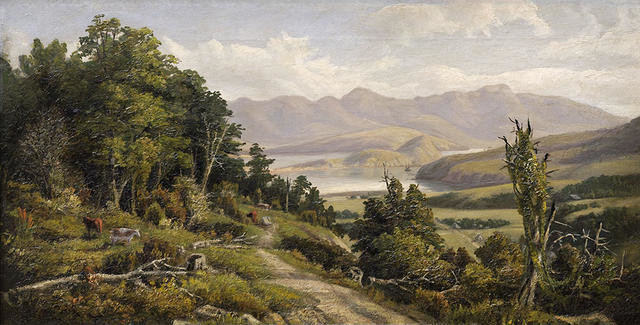 This view of Akaroa harbour, on Banks Peninsula, looks down across Barry's Bay, 14 kilometres north-west of the town of Akaroa. In the centre of the painting is the Onawe Peninsula, which was once the site of a pa, or fortification, belonging to local Ngai Tahu Maori. William Watkins began his career as an amateur artist and many of his earlier paintings have a naïve quality about them. However this work is more realistic and accurate in its depiction of the landscape. It dates from after the time Watkins spent studying at the Victorian Academy of Fine Arts in Melbourne. Watkins was born in London and came to New Zealand with his family in 1850 as Canterbury Association settlers. They lived in Akaroa and Watkins became the first resident photographer living in the town. In 1876 he went to Melbourne to study. From then he exhibited regularly in Australia and New Zealand, including in the International Exhibition in Christchurch in 1882 where he was awarded a silver medal.