Gallery librarian and archivist Tim Jones has been working with director Liz Grant to research and record around forty new audio pieces on works in the collection. I sat down with Tim and Liz to talk about the delights and challenges of the audio guide project.

Tim tells me: ‘The last time we made audio guides we commissioned an author to write the scripts, then we invited celebrity readers to record them, so we have audio guides read by Sam Neill and Miranda Harcourt. And they’re great; they’re timeless and still very interesting. But this time we decided we’d do something a bit different. We have all this archive footage, audio, articles and curators’ research and this seemed like a golden opportunity to deploy these rich resources. We decided that the artist’s own voice was by far the most exciting thing, and that the stories of the works of art became highly personal and engaging in the artist’s own voice.’

Liz adds: ‘Most of the audio guides for galleries I’ve encountered are narrated by curators, so I’d like to congratulate the Gallery on a more imaginative take. Tim has done a wonderful job scouring the globe for artist interviews and archive footage. It’s a wonderful mix of material … a chance to bring in a broader context and other voices, and I think visitors to the Gallery will enjoy the fresh approach.’

At the start of the project, Tim and Liz put in place some rules of thumb for the new audio including the guidelines that within the Gallery audio beats video and short beats long. They concentrated on finding stories—every audio must tell a story—about the work, its provenance, its history, or its importance. And they embraced a variety of styles and voices, from artists speaking about their work, curators’ talks, readings, archive footage and music. Lastly they gave themselves freedom, a piece of audio can be for a single work, for a whole show, or for a group of works scattered though the Gallery.

Tim notes: ‘We don’t want the audio to detract from people looking at the art. We don’t want complicated interfaces and people wandering around the Gallery with their heads down fiddling with their devices. There’s enough of that already. In fact we toyed with the idea of having no audio or video at all to focus peoples’ attention entirely on the art. You do get exhibitions with no labels so you don’t even know who the artist is. But while that’s an interesting approach, we felt it was a bit purist and people do like audio. So we started by looking at what interesting material we had, and linked that back to the works in the collection. It’s the opposite approach to the one we took to create our audio last time, where we started with a list of significant works, and then decided what we would say about them.

‘This approach has highlighted unexpected gems, for example there’s a wood engraving in the collection by Tom Chadwick called When fishes flew and forests walked. The title is taken from ‘The Donkey,’ a poem by GK Chesterton, which tells the story of the donkey that carried Christ into Jerusalem. When you read the poem it adds a whole new dimension to the work of art, and so we have commissioned someone to read the poem aloud and that will be the audio for that work.

‘Another unexpected treasure is the audio for the painting On another man’s land by John Pule. Pule was born in Niue and moved to Auckland as a child. He’s a painter, author and poet and he explores themes of migration and cultural identity in his work. We requested an interview with him about the painting. It turns out he wasn’t keen to be interviewed, but he pointed us to a passage in his essay ‘Clouds and Water’ where he writes about trying on a suit made in New Zealand, given to him by his father, and the significance of that moment, how the suit symbolised his new identity as a New Zealander and the tension it created with his identity as a Niuean. It’s a wonderful passage, and we have recorded it with a young Samoan actor as the audio for On another man’s land.

‘The flip side of this approach is that some of the key works in our collection will have no audio. We looked long and hard for recordings of Rita Angus, but we simply couldn’t find anything. Without this we didn’t feel we had anything really new at this time to say about her work, so, not wanting to create audio for the sake of it, we’ve left her off the list for now. But we’re still looking for recorded interviews with her.

‘As well as our own archives, we have used other archival sources. We have wonderful audio of Gordon Walters talking about the power of the motifs he uses in his paintings and LS Lowry talking about his practise in an old BBC documentary. We’re doing a series of artists’ interviews, including Wayne Youle and Peter Trevelyan, and we have some great footage of Martin Creed in the street outside the Gallery, looking at Work No. 2314, it was the first time he’d seen the work installed.  Another thing we did was go through back issues of Bulletin, and we’ve recorded Elric Hooper and Robbie Deans reading excerpts from their articles about their favourite work in the collection.’

Liz elaborates: ‘Elric Hooper was a young lad of seven when he first stepped into the Robert McDougall Gallery to get out of the rain. Years later he wrote about this incident when he chose his favourite work from the collection for Bulletin. He wrote on The Dutch funeral, and it’s a profound response to a profound work.

‘The piece that thrills me to bits is the interview with L S Lowry. A biography of Lowry was the first art book I ever bought, and my whakapapa goes back to the North of England, so I find his brisk northern take quite poignant. Another high point for me was our train trip through Otira Gorge. The Gallery has a number of works in the collection inspired by the Gorge. We asked Kiwi Rail if they could recommend someone who had travelled the route through Otira, and they put us in touch with Duncan Browne, who has spent 25 years on the TransAlpine. He was very enthused about art and geology. So we recorded our conversation on the train as we talked about Duncan’s experience, about tectonic plates, about art and Van der Velden, and the landscape, all as we travelled through the Gorge.

‘It has been enormously good fun to work on as a project, especially the opportunity to interview today’s artists. There are so many things you can do with audio once you open your mind to different ways to approach it. In the future I’d like to do more extended interviews with artists when works are acquired, create a collection of really important archive materials. And I’d love to record some of the poems children have written, inspired by works in the collection.’

Highlights for Tim have been uncovering the literary references to works in the collection, the LS Lowry film footage and the plans for the audio for the Addington Workshops painting by Louise Henderson, where we hope to use a piece of music from the Addington brass band. In the future he’d like to create a poetry and music tour of the Gallery. He’s also toying with the idea of a sound effects tour, matching appropriate sound effects to works of art in the collection. He’s in two minds about the last, fearing it might be interpreted as facile, but it could be an evocative way to introduce works, especially for children. His long term goal is to have a MONA or Cooper Hewitt style visitor interface that allows people to save audio highlights of their tour and take them home with them as a souvenir of their visit. 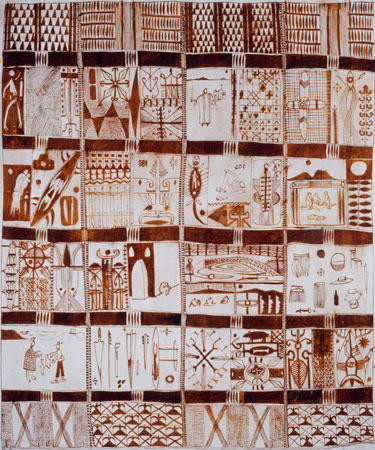 John Pule On Another Man’s Land

Taking visual direction from nineteenth-century Niuean painted hiapo (tapa cloth), John Pule's 'On Another Man’s Land' lays out composite pattern and motif into complex, segmented storylines. Cryptic symbols feature alongside more recognisable imagery such as numbers, creatures and various goods, both customary and introduced. Also pictured are an explorer’s sextant, a missionary and figures embracing, gathered, or in despair.

That this is storytelling from a Polynesian viewpoint is reinforced by Pule’s incorporation of a sketch by the Raiatean priest and navigator Tupaia, made while on board Captain Cook’s Endeavour in the Pacific in 1770. Depicting a Māori chief of Uawa (Tolaga Bay) trading with the naturalist Joseph Banks, it foretells future, often ruinous, moments of exchange.

The painting’s title refers to the Niue-born Pule's own experience of being raised in Auckland, while conceivably raising broader questions. Pule has recently returned to live in Niue. (Kā Honoka, 18 December 2015 – 28 August 2016) 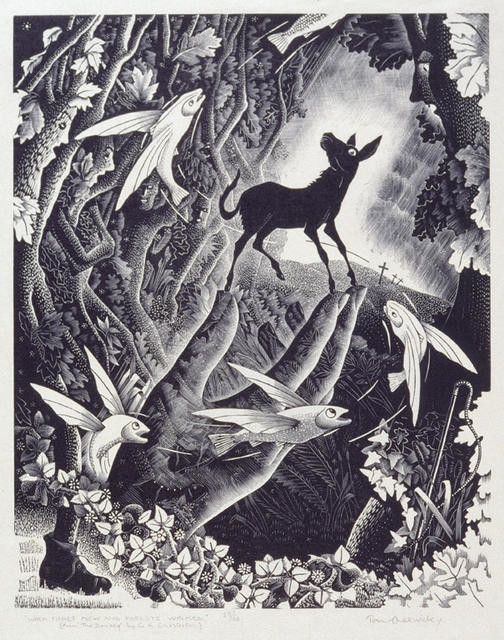 Tom Chadwick When Fishes Flew and Forests Walked (from ‘The Donkey’ By G. K. Chesterton)