We learned of the death of Rodney Wilson yesterday and our thoughts are with his family and friends.

In the 1960s Rodney studied at the Canterbury University School of Fine Arts under Bill Sutton, Russell Clark, Rudolf Gopas and Tom Taylor. He was a foundation lecturer in art history at the University of Canterbury from 1974.

Rodney was appointed director of the Robert McDougall Art Gallery in November 1978, a position he held for just over two years until January 1981. Within these few short years, however, he worked assiduously to professionalise the Gallery, establishing positions for curatorial, conservation, and education staff.

He left Christchurch an impressive legacy with several astute acquisitions made while he was director. Ralph Hotere's Malady Panels were bought during his term, as well as five works by Frances Hodgkins including Zipp, Spanish Still Life and Belgian Refugees. Rodney's 1979 catalogue raisonné on the Dutch artist Petrus van der Velden remains a standout publication in New Zealand art scholarship.

Wilson was frustrated with the limitations of the Robert McDougall Art Gallery, particularly with displaying contemporary art. On his departure he noted in the Gallery's Bulletin in 1981 that, 'Christchurch deserves a bigger and better gallery than it has – it deserves the sort of programme that would result from the provision of more gallery space and spaces better suited to contemporary works, of a classroom, library, better workshops and offices and so on.' We are pleased he agitated for change when he did.

More recently Gallery staff had the pleasure of working closely with Rodney when he organised the exhibition Miles: A Life in Architecture, a survey of Miles Warren's architectural designs, for the Gallery in 2009. Rodney also gave memorable floor talks to packed audiences here at the Gallery on van der Velden and Warren.

Dr T.L. Rodney Wilson was not only director of the Robert McDougall Art Gallery, Christchurch, but also Auckland Art Gallery; National Gallery of Victoria, Melbourne; New Zealand Maritime Museum, Auckland; and Auckland War Memorial Museum. He was awarded the CNZM for his services to museums and art galleries in 2007. 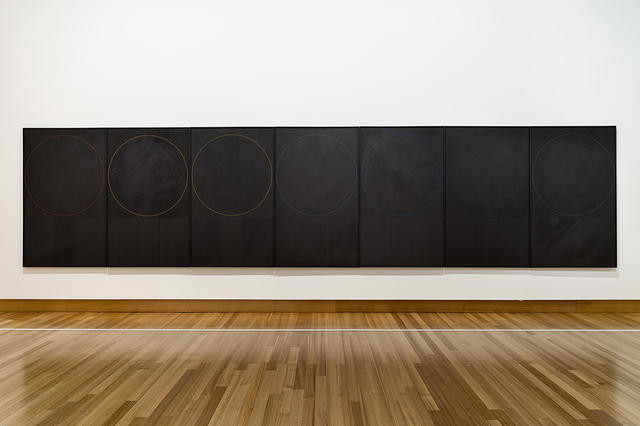 A poem by Bill Manhire was the inspiration for this series of paintings. It repeated the words ‘malady’, ‘melody’ and ‘my lady’ and the repetition, simplicity and strong emotion of the poem appealed to Ralph Hotere. ‘Melody’ and ‘malady’ come together in ‘my lady’, suggesting that deep-felt love can be both a sickness and a delight.

The fine circles in the paintings suggest the fragility of love, and their intense colour celebrates its beauty. Hotere made several works based on this poem during the early 1970s.

Hotere was born in Taikarawa, Northland, and was widely regarded as one of New Zealand’s greatest living artists. He is represented in public and private collections throughout New Zealand. He lived at Port Chalmers near Dunedin. 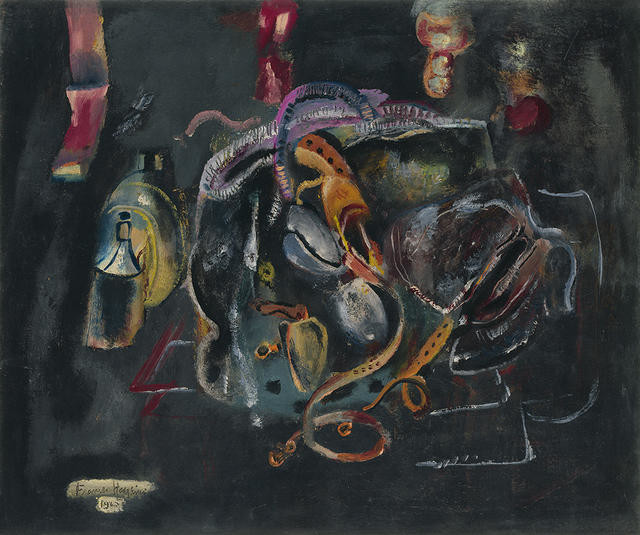 Frances Hodgkins was seventy-seven years old when she painted Zipp in 1945, nearing the end of her career and life. It is one of the last paintings she completed. With its semiabstract shapes and forms set against a despairingly dark background, Zipp highlights how Frances continued to push herself as an artist even through her later years.

Seemingly random objects emerge through the gloom; some distinguisable, others abstracted beyond recognition: belts, a zip, a shoe and some clothing. These personal items belonging to the artist serve not only as a still life, but also as a kind of self-portrait. Most telling is the way they are scattered and heaped in a rumpled pile, perhaps symbolising the disorder in her life at this time. 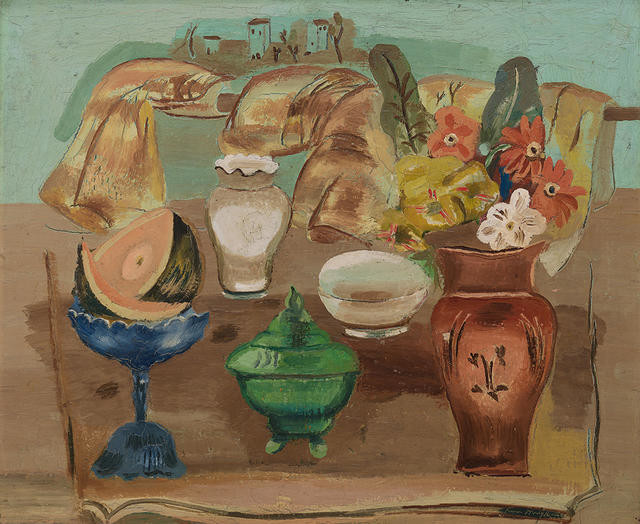 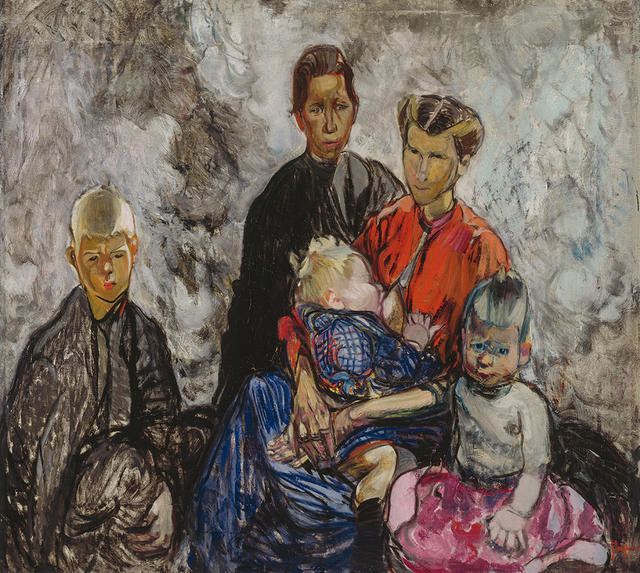 The Dunedin-born Frances Hodgkins was running her own watercolour painting school in Paris when World War I broke out in 1914. She relocated to St. Ives in Cornwall, where she found many displaced Belgian families also living, and painted this work in response to their wretched plight. Unshatterable, one of her first oil paintings, was exhibited in London in 1916 and purchased by the painter Sir Cedric Morris. Dr Rodney Wilson, the Gallery’s director in 1980, visited Morris, and with assistance from the National Art Collections Fund, a British art charity, successfully secured this work for the Christchurch collection.