Snuff bottles were used to contain powdered tobacco, which was often combined with aromatic spices. Snuff-taking was regarded as a remedy for headaches, colds and stomach complaints and was widely used in Europe by the time it was introduced to China in the mid-sixteenth century. In Europe, snuff was stored in small boxes, but the Chinese designed bottles to keep the powder dry and fragrant in humid conditions. These were decorated, some elaborately, and the patterns and motifs used could be symbolic, sometimes conveying a special message between a giver and recipient. The small bottles were easy to hold in a hand or pocket and came in a variety of shapes, some representing vegetables and fruit, others animals, human figures or simple geometric forms. Typical materials included glass, lacquer, metal, jade, ivory and coloured gemstones. This bottle in the ‘wine vessel’ shape features delicate flowers, including peonies. They have been painted with enamel over a copper base, a technique known as ‘Canton painting’ that developed in Canton, in the Guandong province of southern China in the late seventeenth century, primarily for export. It is one of 44 bottles presented to the Gallery by Mr Yeung Tat Che in 1998. 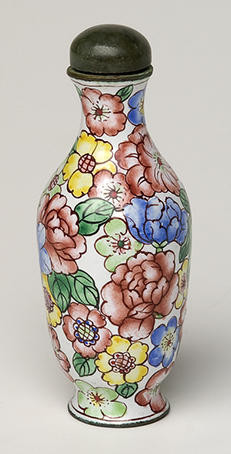 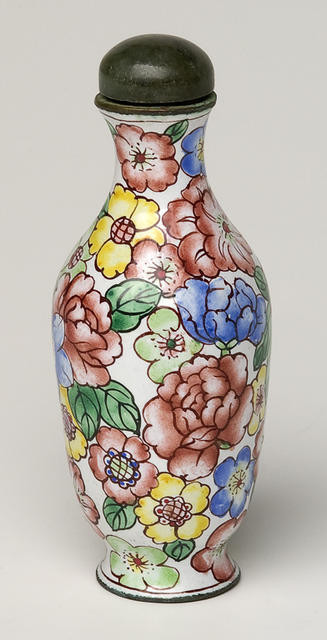