‘Pieta’ is the word used for depictions of the Virgin Mary holding the dead body of Christ. It is a common image in art history but, uncommonly, Marian Maguire has here placed the focus on Mary, rather than Christ. Pieta is part of a series of work that takes the female form as its inspiration. The image is in fact an imprint of Maguire's own body, as she covered herself in paint and lay on the lithography press. Maguire was born in Christchurch and graduated from the University of Canterbury in 1984. During 1986 she studied at the Tamarind Institute of Lithography in Albuquerque. In 1991 she was artist in residence at the Otago Polytechnic School of Art and in 1998 she received an Award for Excellence from the Canterbury Community Trust. In addition to her own practice, Maguire has set up two print making workshops, the Limeworks Lithography Studio (with Stephen Gleeson) in 1987 and PaperGraphica in 1995. She has exhibited regularly throughout New Zealand. 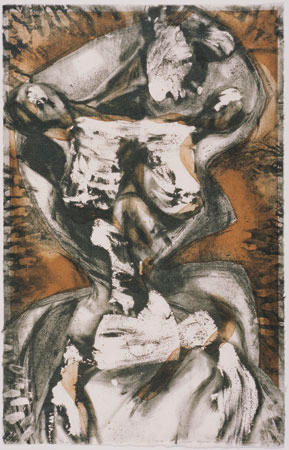