This work was displayed with this label on the death of the artist in September 2021.

Eion Stevens, who died recently, painted as though he was directing a play; setting the stage, adjusting the lighting, adding characters and props to hint at a story, but always leaving enough unseen to create suspense. He constructed his works with great care; ensuring each element not only served the work visually in a precise balance of form and colour but also contributed to a narrative that every viewer could piece together in their own way.

An exceptional memory, which he described as both an ‘irritant’ and a ‘reservoir’, provided Stevens with a vast stockpile of images from life, books, newspapers, films and art. He repurposed these in cryptic combinations, hoping to tweak at our subconscious and prompt associations. In Home Comforts, he created a space that is simultaneously empty and full. No figure inhabits it, but the tools and trimmings of a cultured life do – art on the wall, a record player left invitingly open. Despite the cosy title, Stevens adds a degree of discomfort to this domestic scene, stringing a striped signal flag through the ‘room’ of the painting like a tea towel hanging on a washing line. As an artist, he was always conscious that he was assembling an illusion, one that relies on us to play our part. 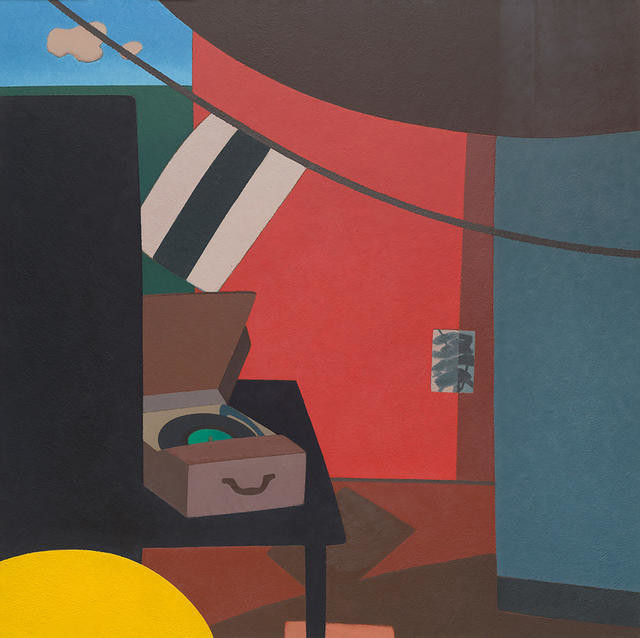