E. Mervyn Taylor has made a distinctively New Zealand scene in this work, showing native trees and ferns as well as birds, a whale and a tuatara. He also seems to have drawn on the Mâori creation myth, in which Papatûânuku, the Earth Mother, and Ranginui, the Sky Father, separate and allow light to enter the world. Taylor has used cross-hatching on the figures themselves to give them form and he throws them into prominence by creating a white shadow. Taylor was born in Auckland. In 1952 Taylor was awarded the Association of New Zealand Art Societies Scholarship and spent it in Te Kaha in the eastern Bay of Plenty studying Mâori life and culture. He was elected a member of the Society of Illustrators, New York, in 1950 and a fellow of the Institute of Arts and Letters, Linau, in 1953. Taylor held a solo exhibition at the Museum of Natural History in New York in 1954 and had work in the ‘First International Biennale of Prints’ in Tokyo in 1957. 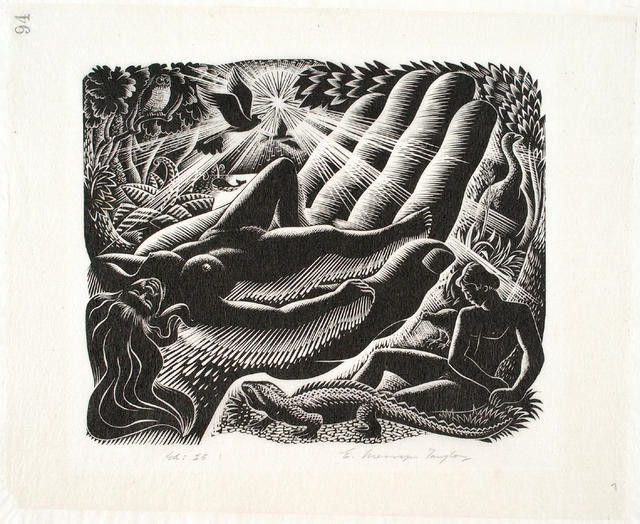