It is likely that this little paddle steamer is the Mountaineer which was launched in 1899. It was one of three steamers which used to ply Lake Wakatipu in Central Otago. The direction of the smoke from the steamer’s funnel and the waves seen buffeting the boats show the force of the nor’west storm. Like many other artists in the 1890s, John McIntosh Madden often visited the area around Lake Wakatipu, where the resort of Queenstown is equally popular today. He continued to visit the region throughout his career and would have painted this work in his Christchurch studio from sketches he had made on his visits.

Born in Wakefield, Yorkshire, Madden studied at South Kensington School of Art and became Drawing Master at Wakefield Grammar School in 1876. In 1877 he emigrated to New Zealand. Madden was an early member of the Canterbury Society of Arts and, in 1893, was a founding member of the Palette Club whose members were concerned with sketching outdoors. 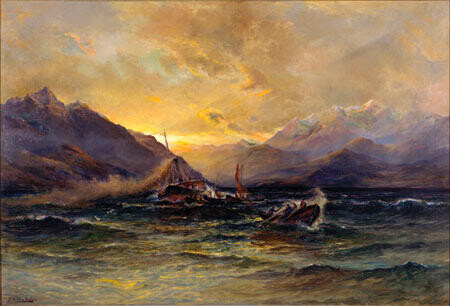