Born in Oxford, North Canterbury, Sydeny Thompson belongs to the first generation of New Zealand-born painters growing up in a colonial society. As an eighteen year old he enrolled at the Canterbury College School of Art and began private lessons with Petrus Van der Velden whose exhibition at the Canterbury Society of Art Gallery in 1894 had made a tremendous impression.

Sydney Thompson was later to write, "I owe a lot to Van der Velden. He insisted on good drawing as a basis for painting and this has served me very well." The part-time lessons continued for three years while Thompson was also studying at the Canterbury College School of Fine Art. By 1899 the young painter was winning scholarships and prizes both in Canterbury and abroad.

Van der Velden's influence is clearly seen in this early work, Tyrolean Peasant. The painter has captured the personality and presence of the sitter, giving the portrait an air of realism and strength typical of the Dutch realist tradition. The expressive brush work, the handling of light, the strong contrasts, the low key tonalities and colour range all owe a considerable debt to Van der Velden's tuition.

When van der Velden left for Australia in 1898 Thompson finished his studies in Christchurch and set up a professional studio in Oxford where he planned to concentrate on portraiture. However the lure of overseas study and recognition was too much. In 1900, with money his father had settled on him to establish his career as an artist, Sydney Thompson left for Europe. 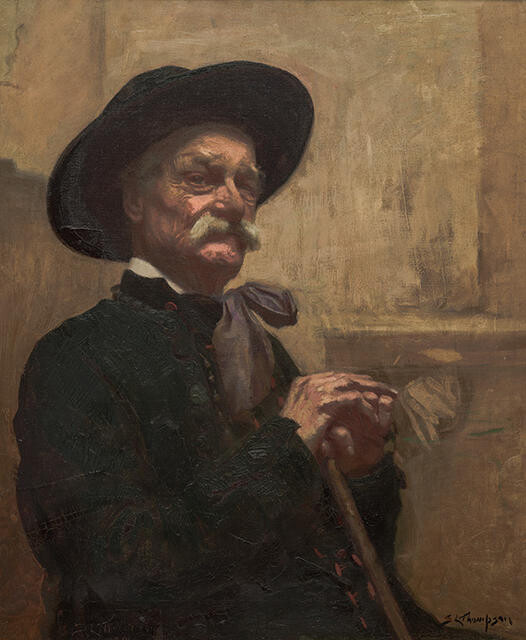