Leaving behind an apprenticeship as a decorator in Birmingham’s japanning trade, William Arthur Breakspeare commenced his serious art training at the Birmingham Government School of Design in 1877, aged twenty-two. Two years later he became a founding member of the Birmingham Art Circle and spent time in Paris, before studying in 1880–1 at The Royal Academy of Fine Arts, Antwerp, with other British painters including Frank Bramley. Breakspeare returned to England in 1881, settling in Haverstock Hill in London; he began showing at the major exhibitions and galleries in 1883. Further travels included a stay in Italy in 1883, when he painted this work. Bramley, who was there at this time, wrote to another friend that Breakspeare ‘was working hard on the small island of Burano (Bay of Venice) and liked Venice very much.’ Breakspeare also spent time at the fledgling artist colony at Newlyn, Cornwall, in 1884, but London was his principal base. 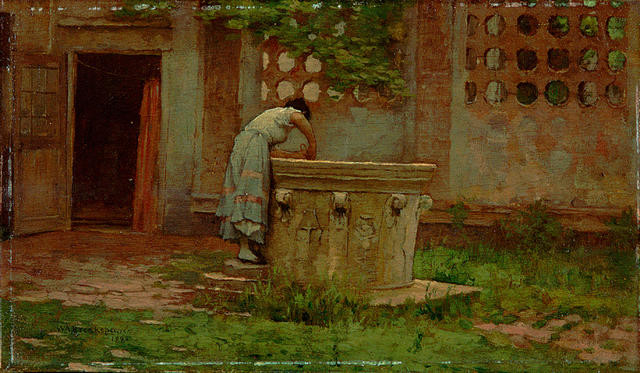