In 1927 John Weeks travelled to Morocco where he travelled and sketched for 15 months. He wrote from Marrakech “...the deep red and the olive green in and around Demont area are a wonder of richness and beauty.” Weeks had been studying with the minor Cubist painter, André L’Hote (1885 -1962), in Paris during 1926 and here has used a modified Cubist style, creating a harmonious design from various shapes and colours. Weeks was born in England, and came to New Zealand with his parents in 1892. He studied art part-time in Auckland but in 1911 left for England. World War I saw Weeks in France, serving with the New Zealand Medical Corps. Between 1921 and 1928 he studied in Christchurch, Edinburgh and Paris and travelled extensively in Europe and North Africa. In 1929 Weeks returned to New Zealand. He taught at the Elam School of Art in Auckland from 1930 to 1954 and was awarded an OBE in 1958. 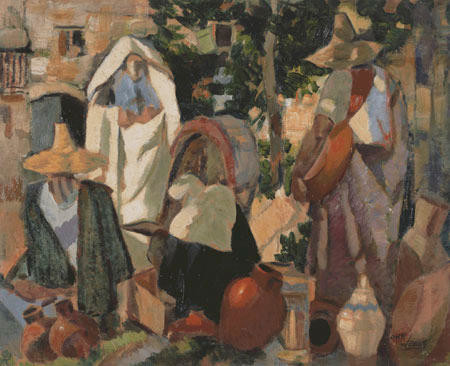