This work was completed when Archibald Nicoll was serving with the New Zealand Expeditionary Force in 1915. He spent nine months in Egypt and often sketched and painted when on leave. He completed several studies of Cairo street scenes. Probably completed out of doors, this work displays Nicoll’s technical ability with watercolour. He has effectively used layered washes to build up the forms of the buildings and street. Nicoll is most well known for his work in oil, and this often overshadows his skill as a watercolourist. Born in Lincoln, Christchurch, Nicoll began evening classes at the Canterbury College School of Art in 1905, while working for the Union Steamship Company Office. By 1908 he was an assistant art master at the Elam School of Art and Design in Auckland. He later studied in London and Edinburgh. Following war service, in 1919 Nicoll was appointed Director of the Canterbury College School of Art. In 1947 he was awarded an OBE for services to art.

If you can tell us where this scene is, then please contact us. 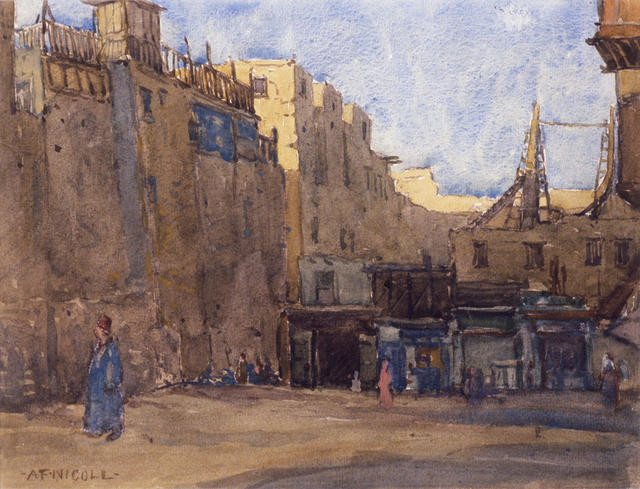