Kenneth Ballantyne was born in Gisborne but received his formative education in Auckland. In 1902, while studying law, he attended classes in design and figure drawing at the Auckland Technical College.

By 1904, having abandoned the idea of a legal career, he was working as a map draughtsman in the Auckland office of the Lands and Survey Department. About this time he also took lessons from C. F. Goldie. Between 1906 and 1910 he exhibited regularly with the Auckland Society of Arts.

In 1910 he moved to Wellington where he continued working in the Lands and Survey office but also began attending classes at Wellington Technical College.

On weekends he often painted with Nugent Welch’s Silverstream group. It is that area near Wellington which was the source of the subject for this painting. Ballantyne also worked for a time as a political cartoonist mostly for the ‘New Zealand Free Lance’.

In 1915 he left New Zealand to live in America and studied at the Chicago Institute before embarking on a career as a illustrator. From 1922, he lived in New York and became a member of the ‘New York Group of Independent Artists. During the late 1920s he returned briefly on a visit to New Zealand but his stay was short. He continued to live in New York and by the time of his death had become well-known as a graphic artist.

Expatriates One and All 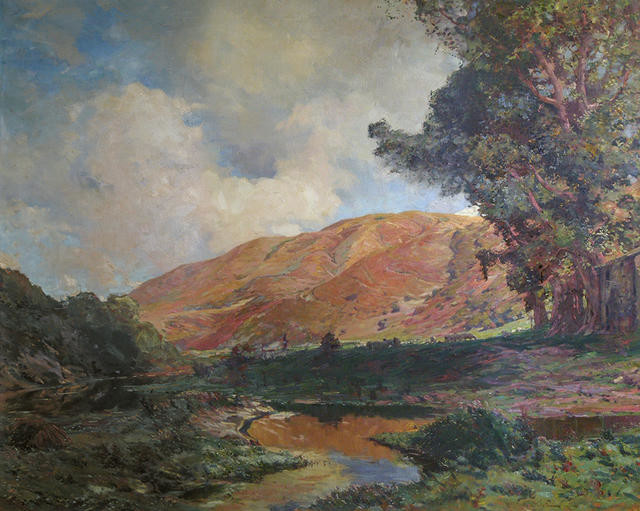