In 1876 John Gully travelled to the North Island preparing works for a folio of chromo-lithographs called New Zealand Scenery. It is likely that he made sketches of ‘Lake Te Wharau’ then. Today this lake is known as Lake Horowhenua. Becoming one of the country’s foremost water-colourists, Gully travelled extensively in New Zealand. He specialised in romantic and atmospheric scenes, which earned him the title of the ‘New Zealand Turner’. This was the second art work to be purchased for the Canterbury Society of Arts’ permanent collection. Born in Bath, England, Gully was apprenticed to an iron foundry, where he graduated to the designing and drafting department. In 1852 he sailed to New Zealand with his wife and children. He worked at a number of things but in 1860 moved to Nelson to be Drawing Master at Nelson College until 1863. Gully was then appointed draughtsman at the Nelson Provincial Survey Office. He retired in 1878 to take up painting full-time. 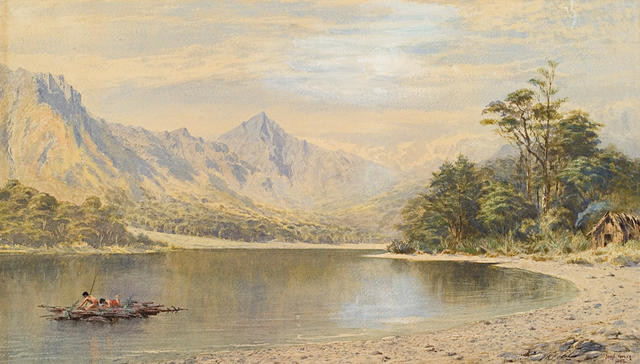