Thomas Cousins enjoyed painting in the Canterbury high country and made regular sketching trips to remote areas such as Bonds Station near the Rolleston Range. The Wilberforce River is a major tributary of the Rakaia River, and Cousins’ view captures the grandeur of the region, looking up the riverbed as a storm rolls down the valley. Cousins was a popular figure in the Christchurch arts scene of the 1870s and 1880s. Little is known of his training, but his father and uncle were both established artists who would have encouraged his interests in art from a young age. Cousins was born in England and was the son of wood engraver Henry Cousins. Around 1863 he emigrated for health reasons to Canterbury, New Zealand, where he worked as a watercolourist and was also employed as a black and white illustrator. He was a founding member of the Canterbury Society of Arts and exhibited in the society’s first exhibition in 1881. He moved to Dunedin around 1885 where he remained until his death. 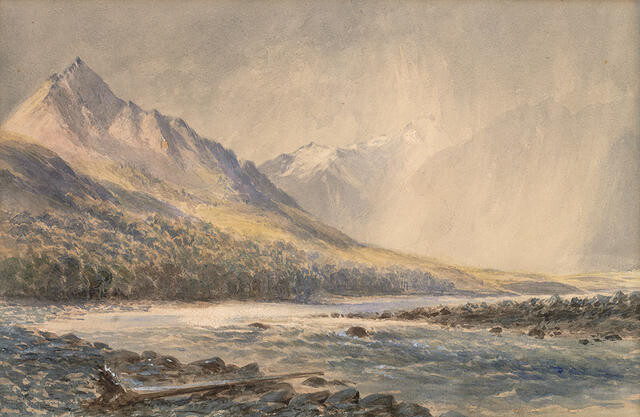