One thing I’m really looking forward to when life returns to a new sense of normality in a post-Covid19 world is visiting a movie theatre – a treat I’ve taken for granted until a couple of weeks ago. In Theatre Beautiful, Dunedin artist Harry Vye Miller captures the bustling busy interior of Dunedin’s Regent Theatre which opened in the city’s Octagon in 1928. Miller enjoyed this theatre and is known to have attended the opening night. The building thankfully remains fully intact and is one of the gems of Dunedin’s architectural heritage.

Miller was an art student at Dunedin’s King Edward Technical School during the mid to late 1920s, and it was here that he was taught printmaking by his two English art teachers, William Allen and Robert Field. Field and Allen were popular with their young students due to their modern outlook on art. The linocut was still a relatively new medium in 1931 when Miller completed Theatre Beautiful and was gaining in popularity in England at the time thanks to the efforts of the medium’s champion, Claude Flight. Broad, bold lines suggest the arch of the theatre’s ceiling, while figures seated in the foreground and silhouetted beyond are simplified shapes giving the work a very refreshing modernist mood for this period in New Zealand art. 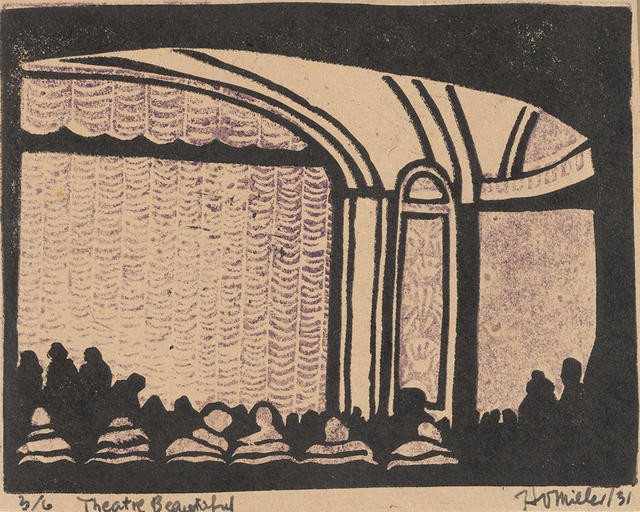