This article first appeared as 'Seaside outing displays a lightness of touch' in The Press on 24 April 2018. 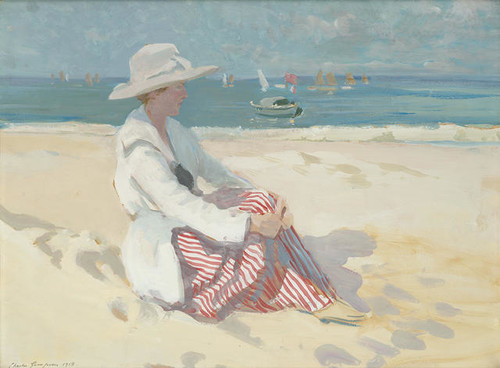 Charles Simpson’s life as an artist falls into two halves, with the Great War at its mid-point. Born in 1885 into a military family Simpson was expected to follow his father into the army. A serious riding accident when aged 15 put paid to this and, with that expectation lifted, his interest in art was perhaps given more space to develop.

He studied at the Bushey School of Painting under the noted painter of horses Lucy Kemp Welch and at the Académie Julian in Paris, and he worked with the even more distinguished animal painter Alfred Munnings. The opportunity to paint in the very house that Munnings had worked in took him to Cornwall and an association with the numerous artists already active in St Ives.

He married fellow artist Ruth Allison in 1913 and together they opened their own painting school in St Ives in 1920. ‘On the Beach’, illustrated here, is dated 1919, just as his career was in full bloom. The sitter is almost certainly his wife. It is a work that can really only be appreciated face to face where the lightness of touch, and the ingenious interplay of pools of light and shadow are entrancing. The whole work is spontaneous and airy, the breeze off the sea blows right in your face. The palette is clever too: by no means a uniform white for the dress, nor sandy brown for the beach. Come into the Gallery and get up close and you will see what I mean.

The catastrophe of the war of course affected writers, musicians and artists in different ways. In some cases it triggered new ways of thinking that we would now label modernist. But for others, including Charles Simpson, it seems to have caused a step back from the Modernist brink to safety. Our painting sees him just as his creative swing is at the height of its arc, with a lightness of touch and more than a hint of impressionism; but, from the mid-1920s onwards, things change.

In 1924 he attended the rodeo performances at the International Exhibition at Wembley. He painted the horses in action and found these sold tremendously well. He was then commissioned by various Leicestershire hunts to paint their horses and hounds in action and to write a book, indeed books, about them. Hunting scenes and paintings of waterfowl became his stock in trade and he continued painting prolifically in this way until the 1960s. Some of his later paintings of show-jumping, admittedly seen only in reproduction, are really terribly bad – a lifetime away from the breezy work he had done as a young man.

‘The Press’ of 21 January 1920 records Christchurch builder James Jamieson visiting Simpson in his studio in St Ives and buying this very painting. Jamieson’s family gave it to the city in 1932.

Charles Simpson’s ‘On the Beach’ (and ‘In the orchard’ by Lucy Kemp Welch) are on display in the exhibition ‘The Weight of Sunlight’ until September. 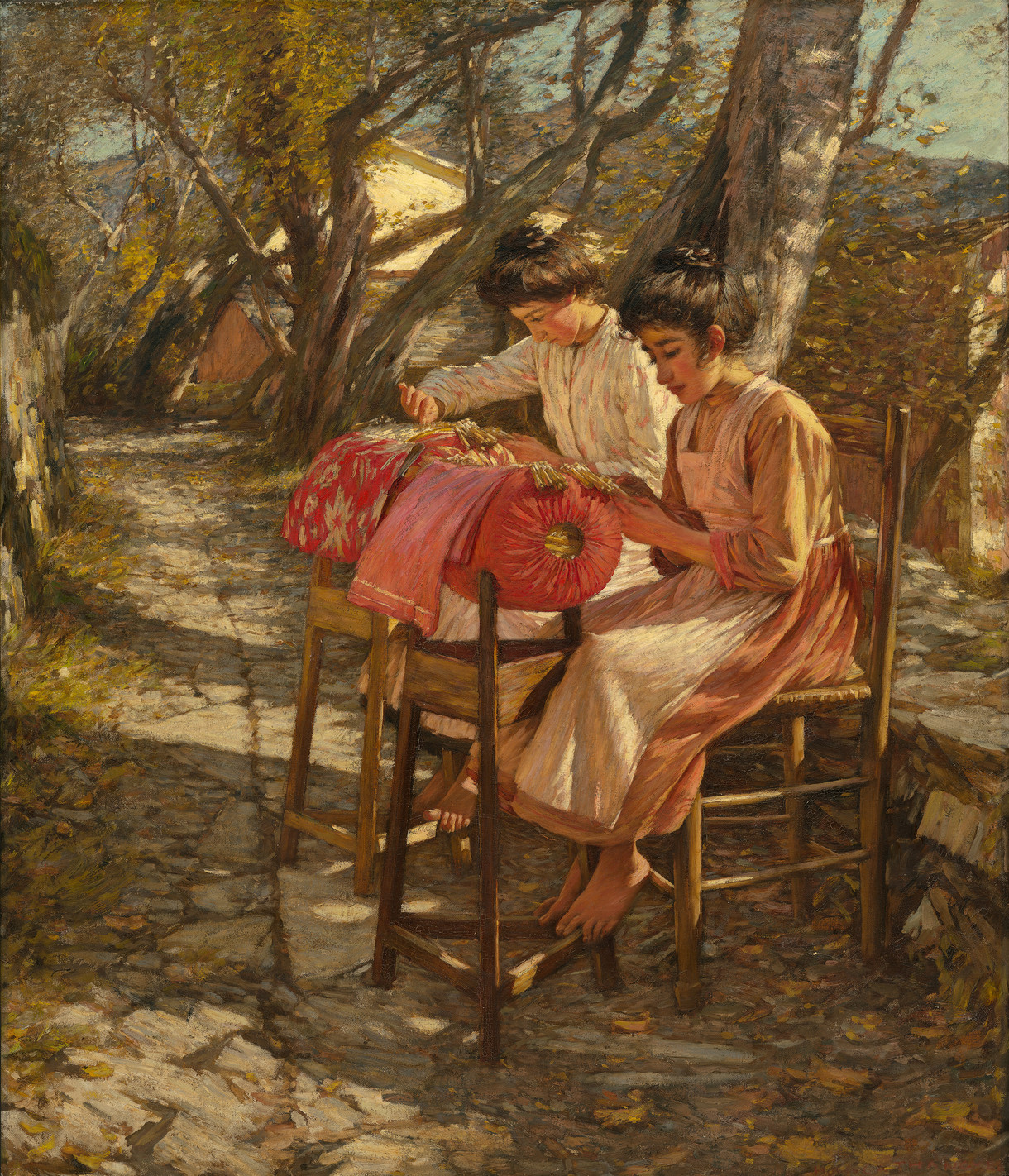 Sunlight, warmth and the lure of escape and travel 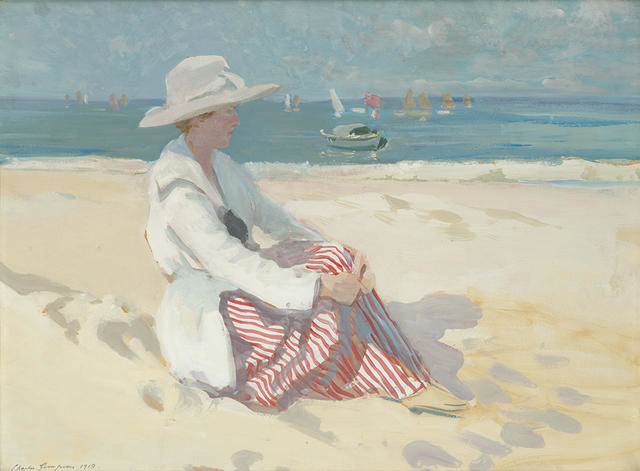 Charles Walter Simpson On The Beach

Charles Simpson and his wife Ruth (the likely sitter for On the Beach) became key figures in the growing artist community in Cornwall in the early years of the twentieth century. Surrey-born Simpson’s early training included study in 1904 under well-known horse painter Lucy Kemp-Welch at The Herkomer School at Bushey, near London. Attracted to Cornwall from his earliest visit in 1905, he became part of the thriving artist colony at Newlyn. Following many in his set, he also took further studies in Paris in 1910 at the Académie Julian. Charles Simpson married Ruth Alison in 1913 and their daughter was born the following year. Relocating within Cornwall from Newlyn to Lamorna, then St Ives, they established and ran their own St Ives School of Painting from 1920–4, before moving to London. This work belongs to an early series that used family members and friends as models, combining Simpson’s interest at portraiture with en plein air observation of Cornish light.