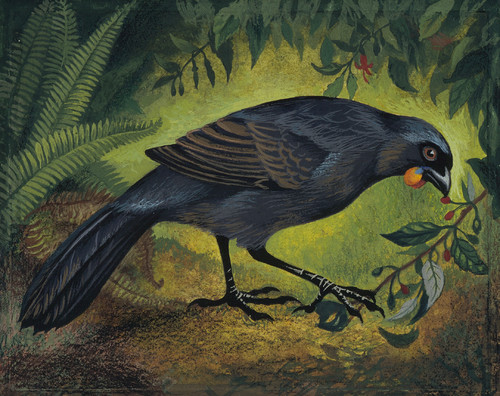 British artist Eileen Mayo (1906-1994) associated with many leading artists in Britain during the 1930s and 40s, including Claude Flight and Laura Knight, before eventually settling in Christchurch in 1965. In 1976 Mayo was commissioned by the Dunedin jelly manufacturer, Greggs, to complete a series of thirty-six paintings of New Zealand birds for the company's album Rare and Endangered Birds of New Zealand. These small exquisite paintings were reproduced as cards and given away with packets of Gregg's jelly in 1977 with the aim that customers collect the entire set and paste them into a specially produced album. While the gallery owns 18 of the original paintings it is the image of the South Island Kōkako (Callaeas Cinerea) that captures my imagination the most.

The kōkako belongs to an ancient family of wattle birds known as Callaeidae which also includes the saddleback and extinct huia. In Māori mythology it was the kōkako that brought Maui water in its wattles as he battled the sun. As a reward Maui stretched the kōkako's legs so that it could bound across the forest floor with ease.

The South Island kōkako once thrived throughout the South Island, from Fiordland to Kahurangi National Park, and Stewart Island. In the ranges behind Oxford here in Canterbury Julius von Haast is known to have found examples in the 1860s. The last 'official' sighting of a South Island kōkako however was at Mt Aspiring in 1967 and the bird was declared extinct in 2006. There is a dedicated group of South Island kōkako enthusiasts that believe the bird still survives in areas of remote South Island native forests, a group who avidly continue to search for evidence of its existence.

The South Island kōkako is smaller than its North Island cousin, which makes an appearance on the reverse of New Zealand's fifty dollar bill. The most significant difference however is its distinctive orange wattle as opposed to the blue wattle of the North Island variety. The song of the kōkako has been described as haunting, melodic and organ like and can carry for kilometres through the forest. There have been numerous reports of what is believed to be the kōkako song in South Island forests in recent years.

In 1976 Mayo would have completed her painting based on taxidermy examples in museum collections but wouldn't it be nice to think that one day an artist may be able to complete a painting of the South Island kōkako from a live bird? Could the grey ghost be lurking in a corner of the South Island's remotest native forests? Best of luck to those on the search. 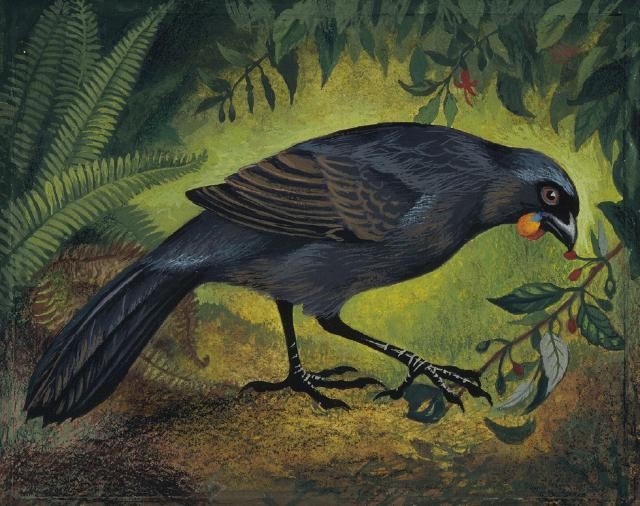