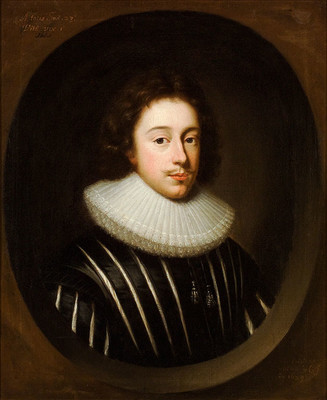 History can be lost and found. In 2009, a painting from the collection titled 'Portrait of an Unknown Man' was unexpectedly identified when a young English visitor to the Gallery recognised it as the likeness of an ancestor; a copy of portrait by Cornelius Johnson that was still in family hands. (Our portrait was purchased in 1978 from an Auckland antique dealer who bought it from a London gallery; its previous history is unknown.) In supplying the young gentleman's identity as the English poet and politician Edmund Waller (1606-1687), her visit opened a closer investigation into the painting itself, which (under strong light) confirmed her report. A Latin inscription at top left read 'Ætatis suæ 23. Vitæ vix. 1' (meaning approximately 'at the age of 23, having scarcely reached the prime of life') and beneath this the name 'Waller' in black. (I like to think we could have made this connection if we'd seen it earlier...) At lower right another inscription read 'The originall was don by CJ in 1629'.

The owner of the original, a direct descendant, also sent us a photograph of the more finely painted portrait in his keeping – he'd been surprised to learn of the existence of a copy (we have since learned of another in the Bodleian Library, Oxford). He also described family celebrations of the poet's 400th anniversary in 2006 with an exhibition in Beaconsfield, Berkshire, England (his burial place), 'where a full size image of this painting was on display. Edmund's tomb was also extensively restored'.

As with the existence of the portrait itself, Edmund Waller's fine attire with broad starched lace collar confirms him to have been a figure of significant status and wealth. First elected to Parliament in his late teens in 1624, he is said to have been one of England's wealthiest men at the time Johnson painted his likeness. Waller entered Parliament several times in the seventeenth century. Misadventures during the politically turbulent 1640s included banishment to the Tower of London for his involvement in a pro-Royal plot, followed by release and temporary expulsion from England on payment of a £10,000 fine in November 1643. Waller was well-known for his poetry during his lifetime: his best-known poem, 'Go, lovely rose', was particularly popular in song. An ability to form sweet words was put to pragmatic use in his 'A Panegyric to my Lord Protector', an ode to Cromwell published in 1655; and 'To the King, upon his Majesty's Happy Return' with the Restoration of Charles II to the throne in 1660. Clearly a skilled politician, Waller is said to have been asked by the King why Cromwell's was the better poem, and to have deftly replied, 'Sir, we poets never succeed so well in writing truth as in fiction.' 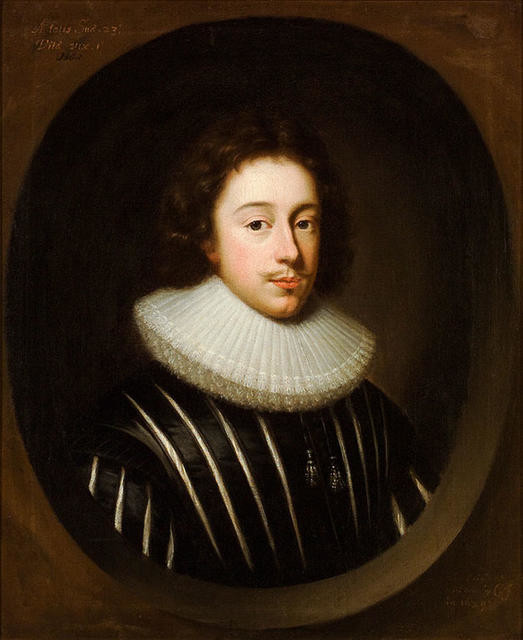 This portrait has recently been identified as a copy of an original portrait of the seventeenth century English poet Edmund Waller (1606 - 1687) an identification which is confirmed by inscriptions on the canvas. The original by Cornelius Janssen van Ceulen (1593- 1661, also known as Cornelius Johnson) was painted in 1629.

Edmund Waller was a well-known English poet and statesman and just 23 when the original 1629 portrait was made. He was also at that time one of the twelve wealthiest men in England. Another copy is known to be in the collection of the Bodleian Library, England.