This article first appeared as 'Her own voice' in The Press on 23 November 2012.

Viola Macmillan Brown (1897-1981) was a leading light in Christchurch artistic circles of the 1920s and 1930s, but she left to marry the Italian opera singer Antonio Notariello (1892-1975) in England in 1936. Across the plains was a gift of their daughters in 2007. As well as bringing this artist to our attention, it is a pleasing, decorative record of an area now greatly changed; the semi-rural outskirts of early Christchurch, looking north from the lower eastern slopes of Cashmere towards a distant Mount Grey. It was painted not far from where she lived with her father, Professor John Macmillan Brown, a founding professor of Canterbury College (later University of Canterbury), who married the ground-breaking Helen Connon, second woman in the British Empire to receive a BA, first to receive an honours degree, and principal of Girls' High from 1882 to 1894. Viola was barely five when her mother tragically died. She and her elder sister Millicent (the poet James K. Baxter's mother) effectively were raised by a governess; their father's Cashmere home became an important cultural hub.

John Macmillan Brown intended that Viola would study at Oxford – Millicent had gone to Cambridge – but his high expectations inadvertently led to a different path. From around 1915 Viola studied at the Canterbury College School of Art and from 1919 at Julian Ashton's Sydney Art School. She exhibited with a group of Australian women artists in Sydney in 1921, but around 1922 travelled to Europe to study at the Slade and Heatherley art schools in London, before spending a year in Florence. Her Italian lessons continued in Christchurch; her future husband first visited New Zealand in 1921 and settled here in 1923, becoming a singing tutor to some 300 pupils before leaving for England at the end of 1926. (Viola's father did not view Signor Notariello as an ideal match; they were married at last after her father's death in 1935.)

In 1927, with a coterie of local artists including her friends Evelyn Polson (later Page) and close relative Ngaio Marsh, Viola was a founding member of The Group, formed in reaction to the stifling traditionalism of the Canterbury Society of Arts. A 1931 critic noted 'The lyrical tonal paintings of Miss Macmillan Brown draw one to quiet contemplation ...There is an aloofness, a feeling conveyed of some thread of melody coming from afar in her charming low-toned landscapes.' Viola Macmillan Brown showed with The Group until 1935, alongside newly-added company including Edith Collier, Francis Shurrock, R.N. Field, Rita Angus, Rata Lovell-Smith and Louise Henderson. As she followed her heart, Christchurch lost one of its more progressive artists. The gift of this painting is an exquisite reminder. 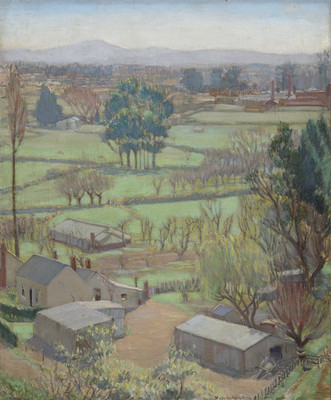 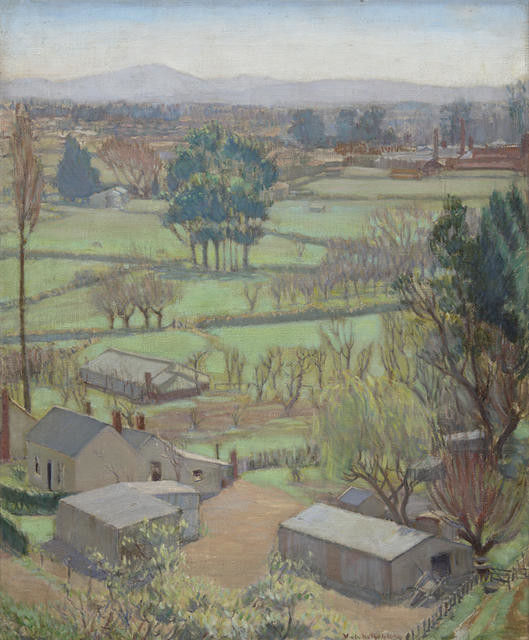 Painted in morning light, evidently in spring, this attractive view captures the semi-rural outskirts of Christchurch from the lower slopes of the Huntsbury foothills, looking north towards distant Mount Grey. The painting’s elevated vantage point, together with its soft, restricted palette and decorative qualities link it to the work of artists such as Rhona Haszard and Sydney Lough Thompson.

Viola Macmillan Brown Notariello was born in Christchurch in 1897, the daughter of Professor John Macmillan Brown and Helen Connon. She studied at Canterbury College School of Art from c.1915-1922, together with her friend Evelyn Page and close relative Ngaio Marsh. After graduating, she exhibited in Christchurch from the late 1920s with The Group. She emigrated after meeting an Italian tenor on tour in New Zealand with Dame Nellie Melba, and they married in England in 1936. She continued her art studies in Europe and exhibited occasionally in England.