This article first appeared in The Press on 4 October 2006 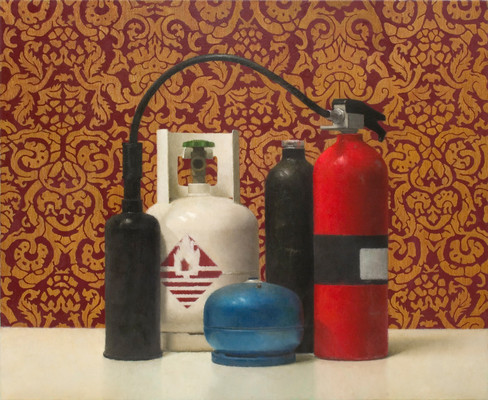 In one of the quietest corners of Christchurch Art Gallery's contemporary collection hang, Jude Rae's SL 145 (2003) pulsates with a steady menace. Its ordered arrangement of objects, emphasis on light and tone, and precise, illusory brushstrokes are hallmarks of the classic still life tradition, but it would be a distinct miscalculation to dismiss it as in any way old-fashioned or predictable.

For one thing, the vases, fruit, books and flowers we might expect to inhabit a conventional still life are nowhere to be seen. Instead, Rae has loaded her composition with an unusual selection of objects that, while still domestic in origin, bristle with implied danger and the threat of imminent combustion. Against a dizzyingly ornate wallpaper backdrop, gas canisters and a hand-held fire extinguisher are braced in an uneasy cluster - ready, it seems, for some disastrous event that is yet to unfold. Though they sidestep the explicit symbolism of Dutch vanitas paintings of the 16th century - where skulls, wilting blooms and decaying game reminded the viewer in no uncertain terms of the brevity of human existence - it is difficult to view these forms as neutral compositional elements. Rae conveys a vivid sense of material presence, so that you seem to experience the weight and solidity of the objects she depicts at the same time as you are registering the play of light over their various surfaces. Denis Diderot said of the 18th century French artist Jean-Baptiste-Sim Chardin (1699-1779), "how freely the air flows around these subjects" and Rae's works suggest a similar attention to elements that are invisible to the eye. Like the gas within the cool metal cylinders, the air in the painting feels compressed and volatile - if this is a still life, it is the stillness of a coiled spring, or a primed explosive.

Rae has described her practice as "a series of material experiments with tradition and perception" and her thoughtful challenges to the conventions of the still-life are grounded not only in an appreciation of the genre, but in an extensive practical knowledge of the discipline. The daughter of the respected Australian figurative painter David Rae, she was schooled in the classical tradition at Sydney's Julian Ashton School of Art, before studying art history at the University of Sydney and later completing a Graduate Diploma in Professional Art Studies at the City Art Institute (now the University of New South Wales College of Fine Arts). She moved to New Zealand in 1990, completing her Master of Fine Arts degree at the University of Canterbury in 1993. At that time, Rae began to reinterpret another artistic tradition - juxtaposing references to the academic depiction of drapery in the paintings of the old masters with titles or fragments of text that encouraged ambiguous, often voyeuristic, readings.

One of these paintings, Clérambault's Dream, was purchased by the Christchurch Art Gallery in 1995. Depicting a vast, rippling expanse of delicately pleated cloth, it takes its inspiration from the strange obsession of the eminent French psychiatrist, G. G. de Clérambault (1872-1934), who owned several wax mannequins over which he draped rare and exotic materials. Clérambault photographed these models over and over again, taking a fetishistic pleasure in the idea of a human body concealed beneath cloth. Now based back in Australia, Rae's most recent paintings continue to explore the fluid relationship between presence and absence through the format of the studio portrait. In a disconcerting series of large-scale works, friends and acquaintances are rendered in realist detail, yet somehow absent themselves mentally from the picture, rebutting the viewer's attempts to read their thoughts and mood, and lending the works a psychological intensity that recalls the interiors of Jan Vermeer (1632-75).

In 2000, Rae wrote;"there is a sense in which a painting can be the undoing of sight". The simple, formal arrangements in her works are far removed from the complex sleights of hand practiced by some realist artists - yet they convincingly evoke a remarkable optical phenomenon - that strange alchemy that happens in the space between an object and our eyes. When we look at an object intensely or for a long time, it begins to blur at the edges - the relationship between what we see and what the mind's eye registers fragments and corrupts. The contrasting textures, oscillating forms and ambiguous material relationships in SL 145 - that black hose arcing over the other objects like an encircling arm, the cool reflective white ground that supports those heavy bottles yet looks empty and insubstantial against the frenetic wallpaper behind it - encourage us to look so closely that even those sturdy cylinders may start to shimmer and dissolve, as though the gas inside them has already begun to escape. 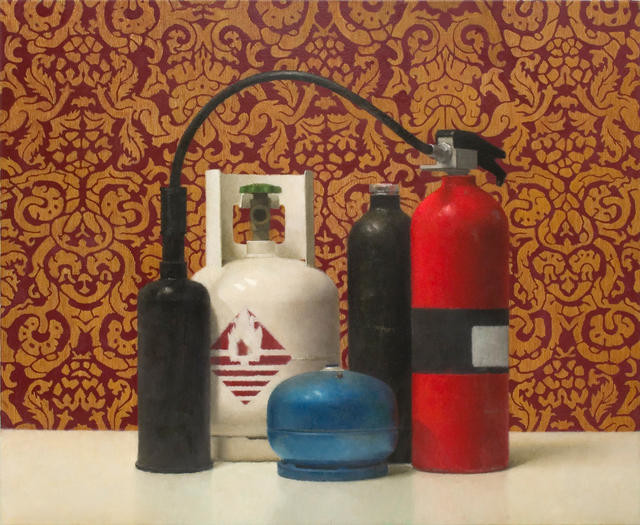