The CCC/CERA workers occupying the Gallery are clearly not underestimating the powers of our femme fatale in bronze, Ex Tenebris Lux. 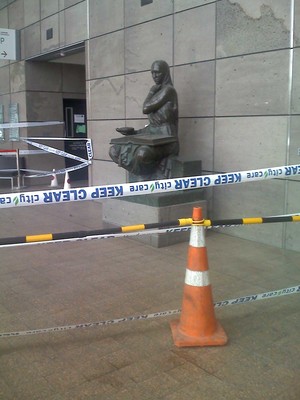 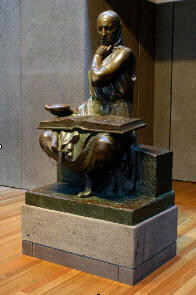 The model for Ex Tenebris Lux, Lorna Waring Rowland, reached New Zealand before the sculpture did. A Londoner, she immigrated to New Zealand in 1937, after sitting for the artist Ernest Gillick in his Chelsea studio. She became a well-known Wellington journalist and writer. In 1938 she wrote about her experiences as an artist's model: “Her career is generally pictured by the public as a glamorous whirl through life, to the accompaniment of hectic bottle parties, illicit love-affairs, tinsel and velvet surroundings, and of course, a good deal of nudity.”

This view was, said Rowland, a lot of nonsense, and models led precarious lives. She commented that the artist sometimes became: “so engrossed in his job that he is completely oblivious of the fact that the person sitting for him has been in a most uncomfortable position for over an hour. Also, when work is over for the day, artist and model do not adjourn (a la American films) to a cocktail bar. Tea, condensed milk, stale buns and bitter [beer] are more usual ingredients of art.”

Ex Tenebris Lux arrived in Christchurch in 1938 and – apart from the period of the Gallery's closure for earthquake repairs – has been on public display ever since. It was purchased by the founding donor of the Robert McDougall Art Gallery for the Gallery’s centre court, on the recommendation of W.G. Constable, head of the Courtauld Institute at the University of London. When its original plaster version was exhibited at the Royal Academy in 1935, it received the Royal Society of British Sculptors’ medal for the best work shown in London that year.

Ernest Gillick was highly regarded as a sculptor of memorials, with works in Britain, France, and India. His only known sculpture in New Zealand, Ex Tenebris Lux is an allegorical work which suggests that the darkness of ignorance is vanquished by the light of learning. “Ex tenebris lux” translates from the Latin as “from darkness comes light”. The lamp is an ancient symbol of enlightenment; the female figure holds it up to illuminate the book on her lap, signifying the power of knowledge.